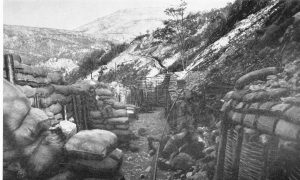 With nine largely unsuccessful Isonzo battles conducted within an eighteen-month period to date, Italian Chief of Staff Luigi Cadorna – responsible for launching all nine – became increasingly uncomfortable at the prospect of German intervention to aid their weakening Austro-Hungarian ally on the Italian Front.

For while it was clear that the Austro-Hungarian Army was suffering in what had become a war of attrition, the same could be said of Cadorna’s army. Casualties suffered to date were tremendous and with each renewed battle tended to be higher on the Italian attackers side.

The UK’s new Prime Minister, David Lloyd George, had long believed that the war could not be won on the Western Front alone. Dubbed an “easterner” at home Lloyd George was nevertheless in favour of diverting British and French resources from the Western Front to the Italians along the Soča (Isonzo), to “knock the props out” from under the Central Powers.

However Lloyd George’s own field commanders, including Commander in Chief Douglas Haig – along with the French – disagreed, arguing that resources could not be spared from the Western Front, particularly with French Commander-in-Chief Robert Nivelle’s upcoming Aisne Offensive, aimed at ending the war in the west within 48 hours.

Consequently, Nivelle dispatched Ferdinand Foch to meet with Cadorna and discuss their possible options. In the event the British and French agreed to rush aid to the Italians only in the event of an emergency – for example, large-scale German military assistance to the Austro-Hungarians; a contingency plan was thus developed to meet with such an eventuality.

The agreed plan was duly invoked – too late – in late October 1917 in the wake of the Italians’ disastrous performance at Caporetto in the Twelfth Battle of the Isonzo.

With the contingency plan arranged the French pressed Cadorna to launch a major offensive of his own along the Soča (Isonzo) to generally co-ordinate with their own large-scale Aisne Offensive (deployed in April 1917). Cadorna agreed and the tenth Isonzo offensive was launched with a preliminary artillery bombardment on 10 May 1917.

The offensive
The Italians, deploying 38 divisions – against only 14 of the Austro-Hungarians – switched tactics once again. The previous three Isonzo battles had seen Cadorna concentrate short, sharp initiatives against closely defined targets, generally aimed at extending their sole bridgehead east of Gorizia. This time the Italians returned to the Kras plateau south-east of Gorizia, setting in train an infantry advance along a 40 km front in order to achieve a breakthrough towards Trieste. The second aim of the offensive was to conquer Mount Škabrijel, thus opening the way to the Vipava Valley.

Initially success appeared likely. By the close of May the Italian army had advanced to within 15 km of Trieste almost reaching the coastal town of Duino, although subsidiary attacks elsewhere failed. Nevertheless, a major Austro-Hungarian counter-offensive launched on 3 June reclaimed virtually all lost ground and by the time the battle was called off by Cadorna on 8 June little territory had been gained.

Some fighting also took place in the northern sections of the front in the Julian Alps, where the Austro-Hungarians strengthened their positions along the Vršič mountain ridge.

Casualties continued to be high: 157,000 Italian losses were sustained, with a further 75,000 Austro-Hungarian casualties. With morale in the Italian army plunging Cadorna planned one further breakthrough attempt as he massed the greatest number of divisions and artillery yet along the Soča (Isonzo) river. Accordingly, the Eleventh Battle of the Isonzo was initiated some two months later on 19 August 1917.