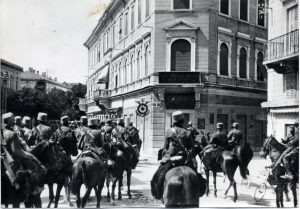 Franz Conrad von Hötzendorf had reduced the Austro-Hungarian forces along the Soča (Isonzo) front to reinforce his Trentino Offensive. Italian Chief-of-Staff Luigi Cadorna made good use of railroads to quickly shift troops from Trentino back to the Isonzo line for an offensive against the weakened Austro-Hungarian defenses.

Battle
On 6 August the offensive was launched against Gorizia. The offensive was concentrated in two zones: the hilly area west of the Soča (Isonzo) river near Gorizia the westernmost edge of the Karst Plateau near Doberdò del Lago. In the Battle of Doberdò, the Italians managed to conquer the main transport road leading from the coast town of Duino to Gorizia, thus securing their advance to Gorizia from the south. The Austro-Hungarian forces had to retreat on the line east of Gorizia (Mount Škabrijel), leaving the heavily damaged town to the Italians.

On 8 August, Gorizia fell to Cadorna and a bridgehead was finally established across the Soča (Isonzo) River. The Austro-Hungarians shifted troops to the Gorizia sector to prevent a breakthrough. Content with having established the bridgehead, Cadorna ended the offensive on 17 August.

The attack on Gorizia was the most successful Italian offensive along the Isonzo lines and greatly boosted Italian morale – especially since Gorizia, whatever its actual value, had been promoted as a desirable objective, unattainable in earlier battles. In the wake of the battle Italy finally declared war against Germany, on 28 August.

In later years, historians maintained that that battle (with 21,000 dead on the Italian side) was a useless and limited conquest, perhaps Cadorna’s only victory. In reality, the Austrians, who were short on troops (having to fight on two fronts), retreated to Slovene territory where Cadorna sacrificed thousands of soldiers in futile attempts to advance toward Ljubljana and Trieste. The Austrians, who were better equipped, preferred to preserve their forces. The Italian generals, in an attempt to make up for their poor equipment, committed the Italians to frontal assaults, resulting in massive casualties.

If one compares the number of dead Italians and the number of dead Austrians, the one sided-ness of the proportion highlights the high cost to this limited victory. In addition, like all other battles on the Soča (Isonzo), there were many missing soldiers, victims of the superior Austrian artillery. 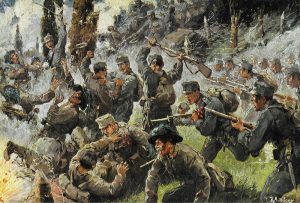 The Battle of Doberdò was one of the bloodiest battlefields of World War I, fought in August 1916 between the Italian and Austro-Hungarian Armies, composed mostly of Hungarian and Slovenian regiments.

The battle, which was part of the Sixth Battle of the Isonzo, took place on a strategic area the westernmost edge of the Karst Plateau. The Italians, who conquered the lowland area around Monfalcone and Ronchi, tried to force themselves over the Karst Plateau in order to gain control over the main road linking the port city of Trieste to the town of Gorizia. After fierce fighting and huge casualties, they succeeded in their attempts. The Austro-Hungarian forces retreated and Gorizia fell to the Italians. They, however, didn’t succeed in forcing their way to Trieste, and were stopped northwest of Duino.

Battle
Fighting culminated on 6 August, when Italian forces under general Luigi Capello launched an attack on Austro-Hungarian positions guarding the main transport road leading from the coast town of Duino to Gorizia. The main objective of the attack was to secure the transport road, thus securing their advance to Gorizia from the south. A plan was drafted by Italian general Luigi Capello, to split the army in half, with one side attacking straight at Austrian positions and the other to attack from the rear.

On the morning of 6 August, Austro-Hungarian artillery began shelling Italian infantry as they were drawing nearer. Following the devised plan, four divisions of Italian infantry launched a straight-on frontal assault on Austro-Hungarian trenches, resulting in many soldiers and officers being gunned down by heavy machine-gun fire. With reinforcements, the Italian infantry managed to penetrate through Austro-Hungarian lines, eventually taking the village Doberdò itself. By now, Austrian forces were in desperate need for reinforcements to halt the Italian advance towards Gorizia. The other half of the Italian army attacked Austrian positions from the rear, as planned. Intensive hand-to-hand fighting commenced, with both sides taking massive losses. Surrounded, Austro-Hungarian forces were forced to retreat, on the line east of Gorizia, giving Italian forces control of the heavily damaged town.

Results
Both sides had taken massive losses, with an estimated of more than 20,000 soldiers killed or missing. Although victorious, Italian losses were much greater than those of the Austro-Hungarians, with around 5,000 of their soldiers killed. This was largely due to the frontal assaults on Austrian positions, which were superior to that of the Italians. Italian generals were eager to crush Austro-Hungarian forces in the area, with the intent of going as far as Ljubljana, while Austrian generals wanted to preserve their troops (having to fight on two fronts), which gave them fewer men to defend their border with Italy. In all, this was a strategically important victory for the Italians despite the outcome of the battle.