The open-air Museum of Mt. Ermada offers a chance to discover the Austro-Hungarian defensive line fortified in September 1916 following the Sixth Battle of the Isonzo. The Italian victory had forced the Habsburg Imperial Army to abandon the high ground around Monfalcone and move to this area around the Karst surrounding Trieste. The choice of settling at Mt. Ermada and the surrounding hilltops was not random, but rather driven by strategic and practical reasons.
From here, in fact, you could control both the Valley of Brestovizza (Brestovica Dol, now part of Slovenia) and the passage to Trieste, the Habsburg town claimed by the Italians. The sinkholes, the passages between the rocks and the natural caves of the Karst Plateau perfectly adapted to the needs of the Great War. Trenches, observation posts and housing for soldiers were built in no time, practically creating an insurmountable barrier for the Italians. All assaults of the Third Army between the Eighth and Tenth Battle of the Isonzo were indeed rejected despite the lower number of Austro-Hungarian soldiers.

Today the Museum offers an itinerary immersed in the typical nature of the Karst surrounding Trieste and includes two rings that can be visited separately or in a single day. The first ring covers the area of Mt. Ermada and starts from an old road linking Ceroglie (Cerovlje) with Medeazza, two villages within the Municipality of Duino Aurisina. Walking along this dirt road, you can see a signpost indicating CAI trail No. 3 and the border with Slovenia. Take this trail and walk until you see a second sign indicating the border and then follow a path on the left. Soon after, you reach the summit of Mt. Ermada, 323 metres ASL.

Along the way, you can visit the Generator Cave and Mt. Ermada Cave. Nearby, an observation point offers excellent views of the villages of Iamiano (Jamlje) and Doberdò del Lago (Doberdob), on the Valley of Brestovizza and the Comeno Karst (Komenski Kras).

You can then choose to go back to Ceroglie or continue along CAI trail No. 3 to the second ring of the museum. If you opt for the latter, continue straight ahead, following stretches of the Austrian entrenched second line, which winds along heights 289, 280 and 279 (the trail is marked as CAI 3° in the last stretch). Here, you can observe several constructions in pre-stressed concrete and artificial tunnels excavated within. The houses of the village of Case Coisce (Kohišče) lie not far away, from where you can take the previous trail leading to the entrance of Karl and Zita Caves, which can be seen as you reach a green electricity pole. Following your visit to the caves, after a few metres, you cross CAI trail No. 8 on the right, which leads first to some ruins at 298m ASL and then to the descent to Ceroglie. 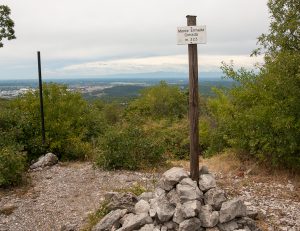