The area of Mengore hill (453 m) west from Most na Soči settlement was the core of the Austria-Hungary defense of the Soča River bridge-passage at town Tolmin. The defense line was heavily fortified with the defense trenches, shelters, artillery positions  and caverns. The area was all the time  of the eleven Italian offensives of Soča River front line from May 23rd 1915 to the September 13th,  1917 under the continuous siege and artillery cannonading. In the 12th offensive when the joined Austro-Hungarian and German troops attacked the Italian positions the Mengore area was the important starting point of the successful breaking trough and pushing the Italian army 90 km to the west to the Piave River. 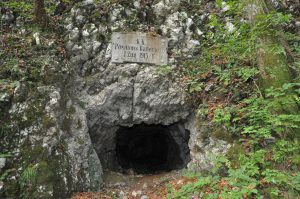