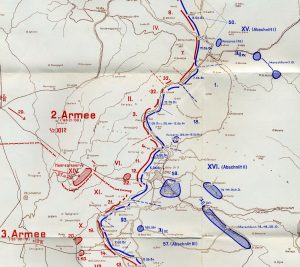 The First Battle of the Isonzo was fought between the Armies of Italy and Austria-Hungary on the Italian Front in World War I, between 23 June and 7 July 1915.

The aim of the Italian Army was to drive the Austrians away from its defensive positions along the Soča (Isonzo) and on the nearby mountains.

Although the Italians enjoyed a 2:1 numeric superiority, their offensive failed because the Italian commander, Luigi Cadorna, employed frontal assaults after impressive (but short) artillery barrages. The Austrians had the advantage of fighting from uphill positions barricaded with barbed wire which were able to easily resist the Italian assault.

The Italians had some early successes. They partially took Monte Nero (Monte Krn), took Monte Colowrat, and captured the heights around Plezzo. However, they were unable to dislodge the Austro-Hungarian troops from the high ground between Tolmino and the Isonzo, which would later form a launching off point for the Caporetto Offensive. The heaviest fighting occurred around Gorizia. In addition to the natural defenses of the river and mountains, bastions were created at Oslavia and Podgora. The fighting at Gorizia consisted of street-by-street urban combat interspersed with artillery fire. Italian troops, such as the Italian Re and Casale Brigades, were able to advance as far as the suburbs but could get no further and were driven back. They made small footholds at Adgrado and Redipuglia on the Karst Plateau south of Gorizia but were unable to do much else.

Early in July the commander of the Austrian Fifth Army, General Svetozar Boroević, received two reinforcement divisions, which put an end to the Italian efforts at breaking through the Austrian lines.