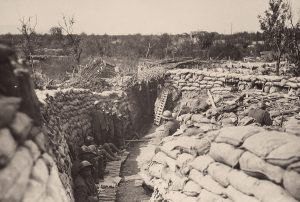 After four attempts to cross the Soča (Isonzo) river and invade Austro-Hungarian territory, Luigi Cadorna, the Italian commander-in-chief, organized a strong new offensive following the winter lull in fighting which had allowed the Italian High Command to regroup and organize 8 new divisions for the front.

However, it was an offensive launched not after detailed strategic planning, but rather as a distraction to shift the Central Powers away from the Eastern Front and from Verdun, where the greatest bloodshed of the war was occurring. The attack was a result of the allied Chantilly Conference of December 1915.

The battle
The attacks ordered by Cadorna for the 2nd and 3rd Italian armies as “demonstrations” against the enemy, proved to be less bloody than those previously. The battles were fought on the Karst plateau, with the objective of taking Gorizia and the Tolmin bridgehead.

After a week of fighting that cost the lives of 4,000 men between both sides, the clashes ceased because of the terrible weather conditions that worsened the trench conditions and because of the Austro-Hungarian “punitive” offensive in the Trentino.

Along certain parts of the front, especially around Gorizia, skirmishes continued between enemy platoons until March 30 and beyond, in a protracted struggle that produced no clear victor.

Cadorna had called upon his Russian allies to keep the Austria-Hungarian units at bay on the Eastern front given Cadorna the chance to redeploy his forces at Trentino all the while abandoning the Fifth Battle of the Isonzo.

Aftermath
With the Fifth Battle of the Isonzo over the Italians now had to plan another assault. Cadorna put his sixth offensive on the drawing board after hearing promises of resupply from Italy’s Allies.