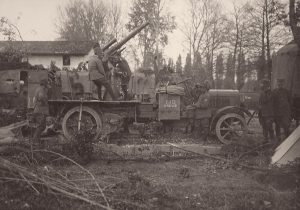 On the Soča (Isonzo) River, Luigi Cadorna, the Italian Chief of Staff, concentrated three quarters of his troops: 600 battalions (52 divisions) with 5,200 guns.

Battle
The attack was carried forth from a front from Tolmin (in the upper Isonzo valley) to the Adriatic Sea. The Italians crossed the river at several points on temporary bridges, but the main effort was exerted on the Banjšice Plateau, whose capture was to further the offensive and break the Austro-Hungarian lines in two segments, isolating the strongholds of Mount Saint Gabriel and Mount Hermada.

After fierce and deadly fightings, the Italian Second Army, led by General Capello, pushed back Boroević’s Isonzo Armee, conquering the Bainsizza and Mount Santo. Other positions were taken by the Duke of Aosta’s Third Army.

However, Mount Saint Gabriel and Mount Hermada turned out to be impregnable, and the offensive wore out.

After the battle, the Austro-Hungarians were exhausted, and could not have withstood another attack. Fortunately for them (and unfortunately for their opponents), so were the Italians, who could not find the resources necessary for another assault, even though it might have been the decisive one. So the final result of the battle was an inconclusive bloodbath. Moreover, the end of the battle left the Italian Second Army (until then the most successful of the Italian Armies) split in two parts across the Soča (Isonzo), a weak point that proved to be decisive in the subsequent Twelfth Battle of the Isonzo.