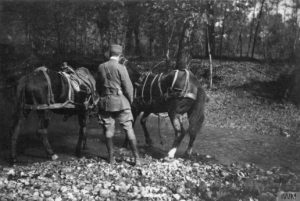 Italian Chief of Staff Luigi Cadorna was determined to continue Italian attacks to the left of the town, a policy that continued during the following (ninth) battle – with an equal lack of success.

As with the earlier, Seventh, attack, heavy Italian casualties required that the short, sharp concentrated initiative be called off pending the army’s recuperation.

The seemingly interminable Isonzo onslaught was next renewed with the Ninth Battle of the Isonzo on 1 November 1916, the fifth and final attack of the year.

In the battle, the Italian architect Antonio Sant’Elia was killed, a key member of the Futurist movement in architecture.