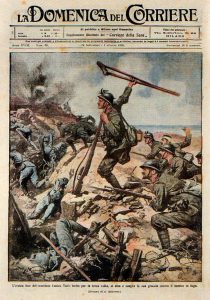 It remains a difficult story with those Italian war heroes. First, after the First World War, the fascists blow all the stories about the Italian heroes to mythical proportions, so that they can no longer be taken seriously, (for which thanks Benito and your friends). And after the Second World War, with Italy as losing and wrong party, there was no motivation anymore to put the Italian soldiers on a pedestal.

But nevertheless, there are special stories to tell about a few people who speak to the imagination. Although fascist propaganda remains lurking in it. This is the story of a one-legged soldier who fought on the Italian front. Now, one-legged soldiers were more common in the war, but Enrico Toti, the protagonist of this story, had already lost his leg before the war began. And where the soldiers who sustained such injuries were no longer part of the fight, Toti stood at the front to sign up as a volunteer.

Toti was not strange about any adventure. During the rehabilitation after an industrial accident, in which he lost his left leg -Toti worked at the railways and in 1908 got stuck between two locomotives- he discovered cycling. With his remaining leg he operated the trapper and he turned out to be very adept at it. He completely surrendered to his passion and in 1911 he rode to Paris on his bike. But it did not stop there. After Paris he drove to Belgium. Then continue to the Netherlands and Denmark. As a Forrest Gump avant la lettre he kept on driving. Eventually he ended up in Lapland and began his return journey to Italy. He chose to run that route via Russia and Poland. He was back home in June 1912, and then started a new bike ride half a year later. This time to the south.

Alexandria in Egypt brought Toti to the border with the Sudan. But here he was stopped. The English authorities did not allow him to go ahead because they considered the situation too dangerous there. Toti turned his bike around and then drove back home again.

And then the war broke out. 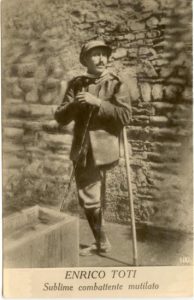 Enrico Toti realized that he could do a lot for the troops on his bike. With his cycling experience he could help with food, water and orders, and he was also prepared to fight. Recruitment clearly differed because of his handicap and he was rejected three times. But Toti did not let himself out of the field. On his bike he finally drove to the front, but on his own initiative, to help out there. This time the military police stopped him. Finally, the Duke of Aosta, the commander of the third Italian army, heard about Toti. The commander was impressed with Toti’s perseverance and used his influence to help Toti and in January 1916 Toti was assigned as a volunteer at the headquarters of the third army. Ultimately, Toti managed to make sure he was also deployed at the front. . And as a sniper at the 3rd battalion. Although he officially never served as a soldier because of his handicap, he was seen as equal by the battalion.

In August 1916 the sixth battle of the Isonzo started. Toti also takes part, as a sniper. To the east of Montfalcone, Toti is hit by two bullets. The story goes that his last heroic act was that he threw his stool at the enemy and cried, “I will not die!”. At that moment a third bullet put an end to the life of the thirty-four-year-old Enrico Toti. At first Toti was buried in Montfalcone. In 1922 he was taken to his final resting place in Rome. The city where he was born. Posthumously he was awarded the highest distinction for courage.

In the open air museum at Montfalcone a monument is to be found in his honor. Statues have been erected in Rome and in many Italian villages or towns a street has been named after him. And in 1928 a submarine was named after him. That happened again in 1968. This last submarine is nowadays to visit as a museum in Milan. They are there, those Italian war heroes.