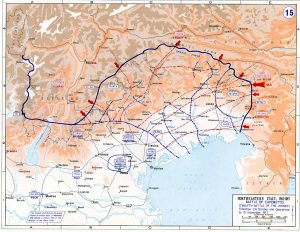 Austro-Hungarian forces, reinforced by German units, were able to break into the Italian front line and rout the Italian forces opposing them. The battle was a demonstration of the effectiveness of the use of stormtroopers and the infiltration tactics developed in part by Oskar von Hutier. The use of poison gas by the Germans also played a key role in the collapse of the Italian Second Army.

The Isonzo river, location of the initial attacks at Kobarid (Caporetto).
In August 1917 Paul von Hindenburg decided that to keep the Austro-Hungarians in the war, the Germans had to help them defeat the Italian army. Erich Ludendorff was opposed to this but was overruled. In September three experts from the Imperial General Staff, led by the chemist Otto Hahn, went to the Isonzo front to find a site suitable for a gas attack. They proposed attacking the quiet Caporetto sector, where a good road ran west through a mountain valley to the Venetian plain.

The Austro-Hungarian Army Group Boroević, commanded by Svetozar Boroević, was prepared for the offensive. In addition, a new 14th Army was formed with nine Austrian and six German divisions, commanded by the German Otto von Below. The Italians inadvertently helped by providing weather information over their radio.[9]

Provisional Italian trenches along the Piave river
Foul weather delayed the attack for two days but on 24 October there was no wind and the front was misted over. At 02:00, 894 metal tubes dug into a reverse slope similar to Livens projectors (Gaswurfminen), were triggered electrically to simultaneously fire canisters containing 600 ml (21 imp fl oz; 20 US fl oz) of chlorine-arsenic agent and diphosgene, smothering the Italian trenches in the valley in a dense cloud of poison gas. Knowing that their gas masks could protect them only for two hours or less, the defenders fled for their lives, though 500–600 were still killed. Then the front was quiet until 06:00 when all the Italian wire and trenches to be attacked were bombarded by mortars.

At 06:41, 2,200 guns opened fire, many targeting the valley road along which reserves were advancing to plug the gap. At 08:00 two large mines were detonated under strong points on the heights bordering the valley and the infantry attacked. Soon they penetrated the almost undefended Italian fortifications in the valley, breaching the defensive line of the Italian Second Army between the IV and XXVII Corps. To protect the attackers’ flanks Alpine Troops infiltrated the strong points and batteries along the crests of the adjoining ridges, Mount Matajur and the Kolovrat Range, laying out their telephone lines as they advanced to maintain contact with their artillery. They made good use of the new German model 08/15 Maxim light machine gun, light trench mortars, mountain guns, flamethrowers and hand grenades.

The attackers in the valley marched almost unopposed along the excellent road toward Italy, some advanced 25 kilometres (16 mi) on the first day. The Italian army beat back the attackers on either side of the sector where the central column attacked, but Below’s successful central penetration threw the entire Italian army into disarray. Forces had to be moved along the Italian front in an attempt to stem von Below’s breakout, but this only weakened other points along the line and invited further attacks. At this point, the entire Italian position was threatened.

The Italian 2nd Army commander Luigi Capello was commanding while bedridden with fever. Realizing that his forces were ill-prepared for this attack and were being routed, Capello requested permission to withdraw back to the Tagliamento. He was overruled by Cadorna who believed that the Italian force could regroup and hold out. Finally, on 30 October 1917, Cadorna ordered the majority of the Italian force to retreat to the other side of the Tagliamento. It took the Italians four full days to cross the river, and by this time the German and Austro-Hungarian armies were on their heels. By 2 November, a German division had established a bridgehead on the Tagliamento. About this time, however, the rapid success of the attack caught up with them. The German and Austro-Hungarian supply lines were stretched to breaking point and consequently they were unable to launch another attack to isolate a part of the Italian army against the Adriatic. Cadorna was able to retreat further and by 10 November had established a position on the Piave River[10] and Monte Grappa, where the last push of the German and Austro-Hungarian forces was met and defeated by Italian forces at the First Battle of Monte Grappa.

Even before the battle, Germany was struggling to feed and supply its armies in the field. Erwin Rommel, who, as a junior officer, won the Pour le Mérite for his exploits in the battle, often bemoaned the demands placed upon his “poorly fed troops”.[16] The Allied blockade of the German Empire, which the Kaiserliche Marine had been unable to break, was partly responsible for food shortages and widespread malnutrition in Germany and the Central Powers in general. When inadequate provisioning was combined with the gruelling night marches preceding the battle of Caporetto, a heavy toll was imposed on the German and Austro-Hungarian forces. Despite these logistical problems, the initial assault was extremely successful. However, as the area controlled by the combined Central Powers forces expanded, an already limited logistical capacity was overstrained. By the time the attack reached the Piave, the soldiers of the Central Powers were running low on supplies and were feeling the physical effects of exhaustion. As the Italians began to counter the pressure put on them, the German forces lost momentum and were once again caught up in another round of attrition warfare.

Marshal Luigi Cadorna
Sullivan called Caporetto “the greatest defeat in Italian military history.” Schindler wrote “By any standard, Twelfth Isonzo [Caporetto] and its aftermath represented an unprecedented catastrophe for Italian arms.” The disaster “came as a shock” and “triggered a search for scapegoats,” culminating in a 1919 Italian military commission that investigated the causes of the debacle. At Rapallo, a Supreme War Council was created to improve Allied military co-operation and develop a common strategy. Luigi Cadorna was forced to resign after the defeat, a final straw according to the Prime Minister, Vittorio Emanuele Orlando. Cadorna was known to have maintained poor relations with the other generals on his staff and by the start of the battle, had sacked 217 generals, 255 colonels and 355 battalion commanders. In addition, he was detested by his troops as being too harsh.[24] Cadorna had been directing the battle 20 miles (32 km) behind the front and retreated another 100 mi (160 km) to Padua when replaced by Armando Diaz and Pietro Badoglio. Italian propaganda offices were established, promising land and social justice to soldiers. Italy also accepted a more cautious military strategy from this point on. Diaz concentrated his efforts on rebuilding his shattered forces while taking advantage of the national rejuvenation that had been spurred by invasion and defeat.

Italian POWs after the battle.
Italian losses were enormous: 10,000 were killed, 30,000 wounded and 265,000 were taken prisoner – morale was so low among the Italian troops, mainly due to Cadorna’s harsh disciplinary regime, that most of these surrendered willingly. 3,152 artillery pieces, 3,000 machine guns and 1,712 mortars were lost, along with a vast amount of stores and equipment. In contrast, the Austro-Hungarians and Germans only sustained 70,000 casualties.

Subsequent operations
The last push of Austro-Hungarian and German forces was met and defeated by Italian forces at the First Battle of Monte Grappa: they had advanced more than 100 km (62 mi) in the direction of Venice, but they were not able to cross the Piave River. Although up to this point the Italians had been left to fight on their own, after Caporetto they were reinforced by six French infantry divisions and five British infantry divisions as well as sizeable air contingents. However, these troops played no role in stemming the advancing Germans and Austro-Hungarians, because they were deployed on the Mincio River, some 97 kilometres (60 mi) behind the Piave, as the British and French strategists did not believe the Piave line could be held. The Piave served as a natural barrier where the Italians could establish a new defensive line, which was held during the subsequent Battle of the Piave River and later served as springboard for the Battle of Vittorio Veneto, where the Austro-Hungarian army was finally defeated after four days of resistance.

The Museum of the Isonzo Front in Kobarid, Slovenia
After this battle, the term “Caporetto” gained a particular resonance in Italy. It is used to denote a terrible defeat – the failed General Strike of 1922 by the socialists was referred to by Mussolini as the “Caporetto of Italian Socialism”. Many years after the war, Caporetto was still being used to destroy the credibility of the liberal state.

The Battle of Caporetto has been the subject of a number of books. The Swedish author F.J. Nordstedt (pseud. Christian Braw) wrote about the battle in his novel Caporetto. The bloody aftermath of Caporetto was vividly described by Ernest Hemingway in his novel A Farewell to Arms. Curzio Malaparte wrote an excoriation of the battle in his first book, Viva Caporetto, published in 1921. It was censored by the state and suppressed; it was finally published in 1980.

Today, a museum in the town of Kobarid is dedicated to the Isonzo Battles in general, and the Caporetto Battle in particular.