On a sunny day during my first visit to Isonzofront was a day trip to Gorizia on the agenda. After an early breakfast in Tolmin we rode on Monday morning to this former Austrian city, then called Görz. The road from Tolmin to Gorizia extends largely along the Isonzo and by the morning peak, the total lack of it – enjoying the landscape and the sun.

After a short hour, we approached Gorizia’s surroundings. In the valley in which we drive, the Isonzo slowly flows on our right to the Adriatic Sea. It is extremely peaceful and it is hard to imagine that the Italian soldiers were on our side hundred years ago. On the left of the road lies the hill where the Austrian units had been opposed to the Italians.

On the right, a few meters above the shore, is an old building built against the “Italian” hill. It seems to be a kind of gallery. The stones and the architectural style suggest that this gallery also existed during the outbreak of the war.

The gallery appears to be the Babinrub tunnel and was part of the railway line from Klagenfurt to Triest. It served to protect against falling rocks and other inconvenience that could come from the hill on the railway line. For the Italians it was a welcome shelter against the Austrians who lay on the opposite slope. And through the galleries in the gallery they could again take the Austrians well under fire. This to the great annoyance of the Austrians, who had barely shelter. 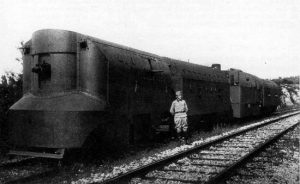 An Austrian officer came with a simple plan to get rid of this annoyance. In a safe tunnel near Görz they had PanzerzugII: an armored train. What if they would use this train to clean the tunnel clean? Let the train drive through it and the Italians would be driven out of the tunnel. The plan was initially received enthusiastically, more it turned out to be a simple show of things. After exploring it became apparent that the railway line was damaged in various places and that the Italians had barriers in various places. Although the Austrian army leadership became somewhat less enthusiastic, a staff chief was still pushing the plan. The fact that some adjustments were made to the plan. Some damage to the railway line that was easily accessible to the Austrians was repaired in a number of nights. The repairs were camouflaged to not warn Italians. In addition, the train was equipped with a repair carriage, so that the damage could be repaired on the spot later on. And by connecting the repair car at the front of the train system, mines could also be switched off.

On the evening of September 11, 1915, the train commenced. Armored trainers armed with fast-paced cannon and carriages, and a crew of soldiers and railroad workers who formed the repair group. By train across the Isonzo at Solkan -not missing if you are near Solkan, the train slowly drives towards the tunnels. After about three kilometers, the train arrived in the no-man’s land. Extra Austrian troops were ready for support (and to cover the retreat once the job was completed). At the oar the train stopped, because parts of the railway had to be repaired. Fortunately for the crew, the river made the necessary noise so that the Italians were not immediately alarmed about the imminent evil. At 4:30 the train was near the tunnel and the train was discovered by the Italians. These turned the gun to the train and began to fire them. The train could not continue, but the train on the train was able to answer the fire. The Austrian combat units jumped out of the train and, assisted by the Austrian units that took the tunnel from the opposite hill, the Italians were chased out of the tunnel.

But as happened to the various frontiers of the Great War, consolidating a conquered goal is a difficult task. As soon as the light became apparent, more and more Italian shuttles received the train and the Austrian soldiers at the tunnel in the visor. The situation was not sustainable and the train had to retreat slowly. Eventually the attack was no more than a very small pinch of punishment towards the Italians. For the Austrian troops across the tunnel, the action was especially a small boost to morale. The Austrian commander who led the attack got a small distinction for his action.

And the Italians? The Italians soon returned to the tunnel. And those names are certain for the uncertainty and the railway bridge at Solkan blows up to prevent a repetition.