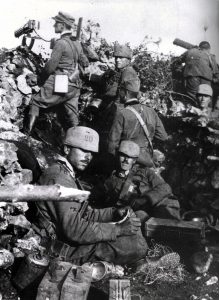 After the failure of the First Battle of the Isonzo, two weeks earlier, Luigi Cadorna, commander-in-chief of the Italian forces, decided for a new thrust against the enemy lines with a heavier artillery support.

The overall plans of the Italian offensive were barely changed by the outcomes of the previous fight, besides the role of general Frugoni’ Second Army, which this time had, on paper, to carry out only demonstrative attacks all over his front. The major role was assigned to the Duke of Savoy’s Third Army, that must conquer Mount San Michele and Mount Cosich, cutting the enemy line and opening the way to Gorizia.

General Cadorna’s tactics were as simple as they were harsh: after a heavy artillery bombardment, his troops were to advance frontally against the Austrian trenches and take them, after having overcome their barbed-wire fences. The insufficiency of war material – from rifles, to artillery shells to shears to cut the barbed wire – nullified their numerical superiority caused by the recent arrival of 290,000 Italian soldiers. 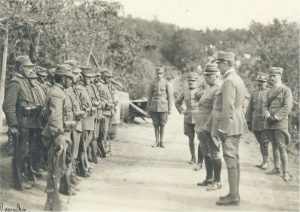 The battle
On the Karst Plateau took place an exhausting series of hand-to-hand fights involving the Italian Second and Third Armies, with severe casualties on both sides. Bayonets, swords, knives, and various scrap metal and debris were all used in the terrifying melee. The Hungarian 20th division lost two-thirds of its effectives and was routed, partly because of the successive attacks and partly because of the unfavourable terrain.

On 25 July the Italians occupied the Cappuccio Wood, a position south of Mount San Michele, which was not very steep but dominated quite a large area including the Austrian bridgehead of Gorizia from the South. The Mount San Michele was briefly held by Italian forces, but a desperate counterattack by Colonel Richter, commanding a group of elite regiments, recaptured it.

In the northern section of the front, in the Julian Alps, the Italians managed to conquer Mount Batognica over Kobarid (Caporetto), which had an important strategic meaning in the next battles.

The battle wore out on its own when both sides ran out of ammunition for both light arms and artillery. The total casualties during the three weeks were about 91,000 men, of which 43,000 Italians and 48,000 Austro-Hungarians.