Fogliano Redipuglia was part of the Isonzofront for a long time during the First World War on the border of Italian and Austria-Hungarian armies. Several battles took place on the Isonzo River, where many tens of thousands of dead were to regret.

Sacrario di Redipuglia The Memorial of Redipuglia is Italy’s largest and most majestic memorial dedicated to the soldiers who fell in the Great War. Built at the time of Benito Mussolini, on the slopes of Mt. Sei Busi and designed by architect Giovanni Greppi and sculptor Giannino Castiglioni, it was opened on 18th September 1938 after ten years of construction. This massive monument, also known as Memorial “of the Hundred Thousands”, accommodates the remains of 100.187 soldiers who fell in battle in the surrounding areas; some of them had been initially buried on Colle Sant’Elia nearby.
Strongly advocated by the fascist regime, this monument intended to celebrate the sacrifice of the fallen soldiers as well as provide a dignified resting place to those fighters who could not be buried in the cemetery of the Undefeated. It is structured on three levels, symbolising the army descending from the sky, led by its Commander towards the Path of Heroes. On the top, three crosses evoke Mt. Golgotha and the crucifixion of Christ.

Leaving your car in the esplanade before the Memorial, the visit can kick off past the chain of the destroyer “Grado”, an Austro-Hungarian vessel seized by the Italians after the war. Heading towards the tomb, you walk along the “Path of Heroes”, a paved road lined by 38 bronze plaques indicating the villages on the Karst that were contended during the Great War.
At the end of this fascinating walk, you can see the majestic tombs of the generals, including the one of the Commander of the Third Army, Emanuele Filiberto Duke of Aosta, who had expressed his wish to be buried here. The tomb consists of a 75-tonne block of red marble from the Camonica Valley. On the side, there are the granite tombs of five generals: Antonio Chinotto, Tommaso Monti, Giovanni Prelli, Giuseppe Paolini and Fulvio Riccieri.
Behind the tombs, 22 large steps (2.5m high, 12m wide) rise, containing the remains of 39857 identified soldiers in alphabetical order. Each burial niche is surmounted by the wording “PRESENTE”, the answer of the soldiers during there appeal, and can be reached via the lateral stairs leading to the top. In the centre of the first large step, you can find the niche of the only woman buried here, a nurse named Margherita Kaiser Parodi Orlando, while the 22nd step accommodates the remains of 72 soldiers from the Navy and 56 from the Customs Corps.
At the end of the lateral stairs and the large steps, two large tombs covered with bronze plates contain the remains of over 60 thousand unknown soldiers. Past them, you can reach the top of the memorial and visit a small chapel which houses a “Deposition” and the panels of the Stations of the Cross by sculptor Castiglioni. Three bronze crosses stand above the chapel.

In the rear of the last large step there are two museum rooms: inside, you can admire pictures of the first Memorial of Redipuglia, documents, war relics and paintings by Ciotti that used to decorate the tomb of the Duke of Aosta, originally located in the chapel on the top of St. Elias Hill. On the top, at Height 89, you can see an Observatory and a model of the area showing the borderline as of 24th October 1917, the day of the Twelfth Battle of the Isonzo. 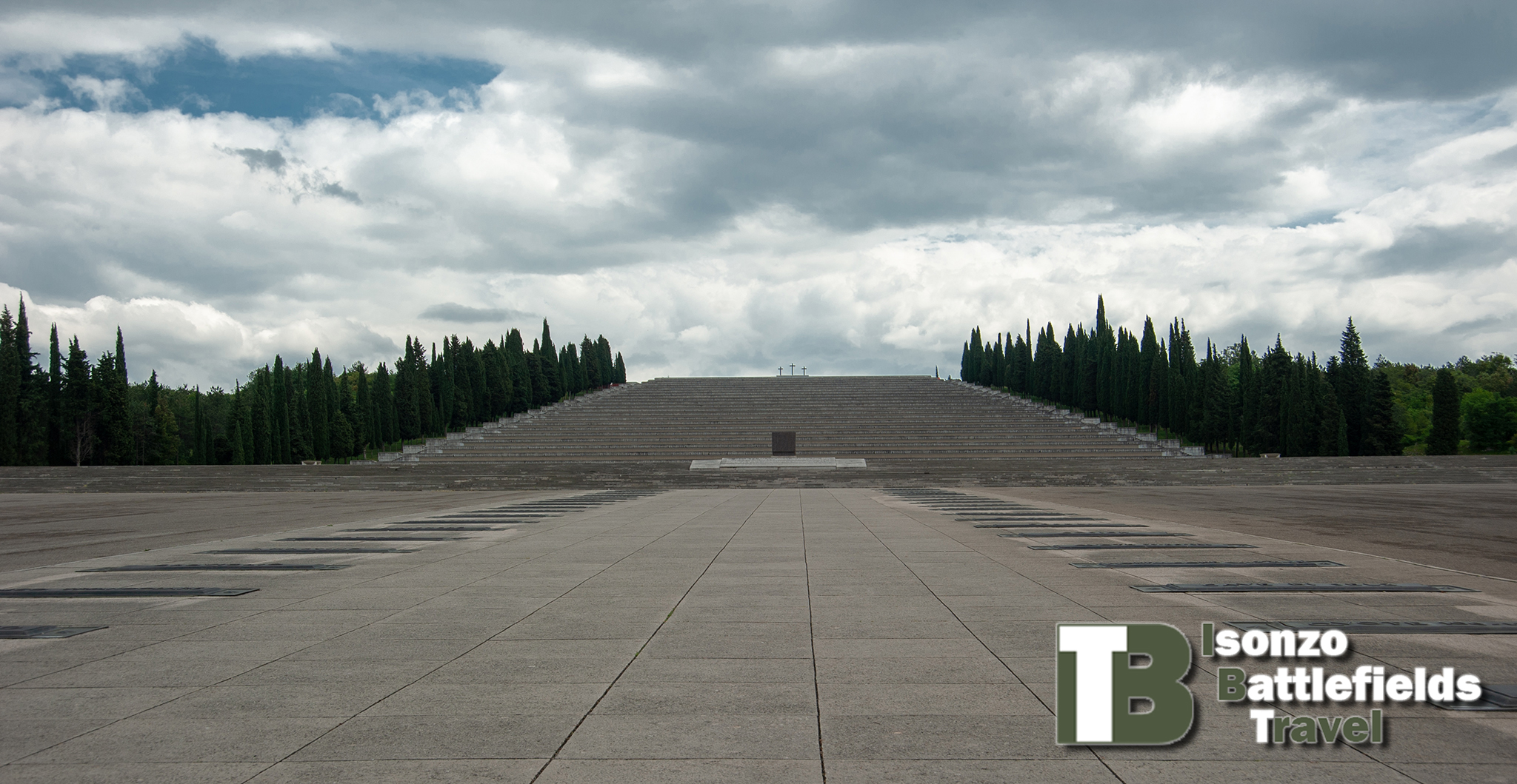 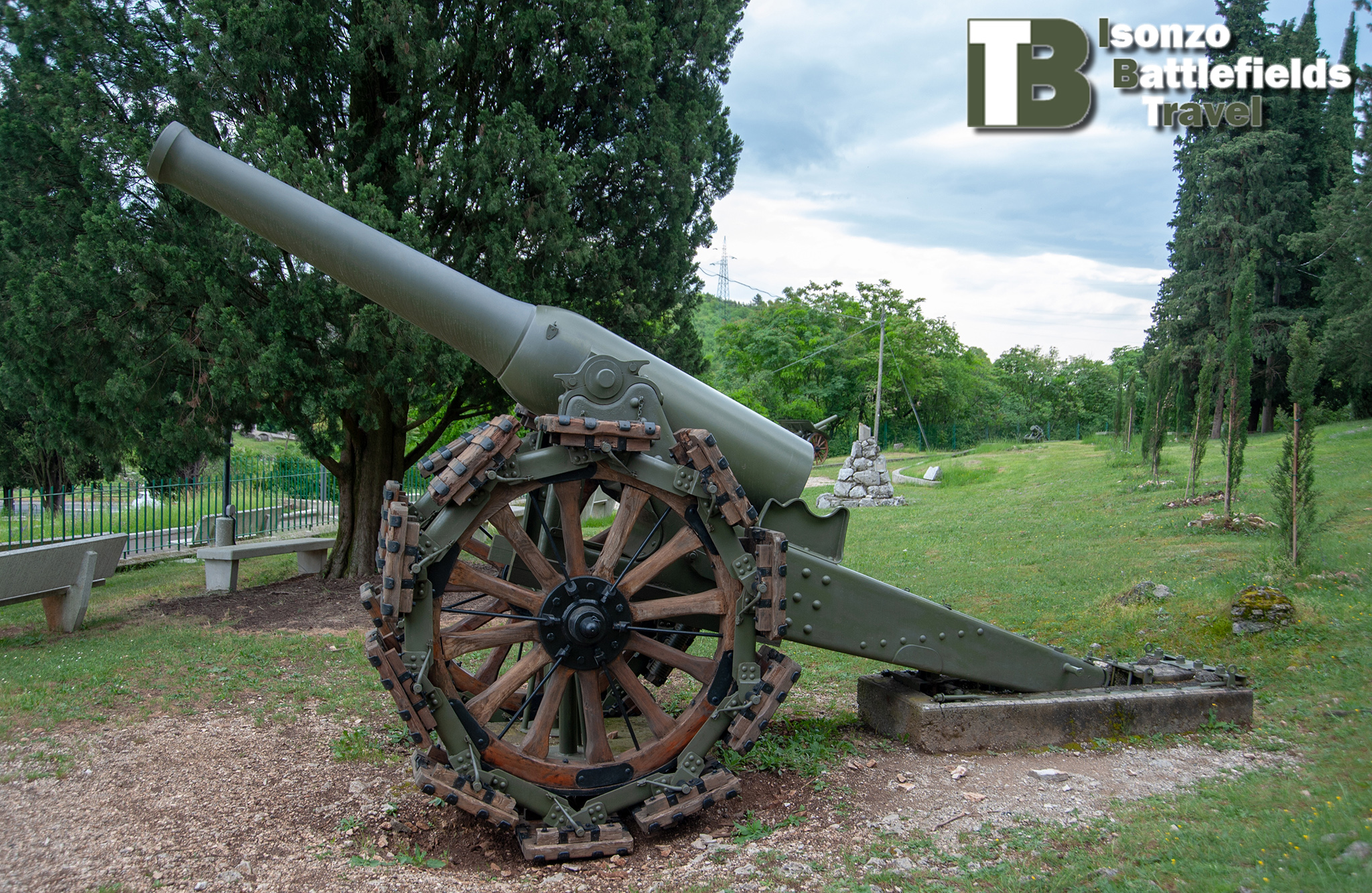 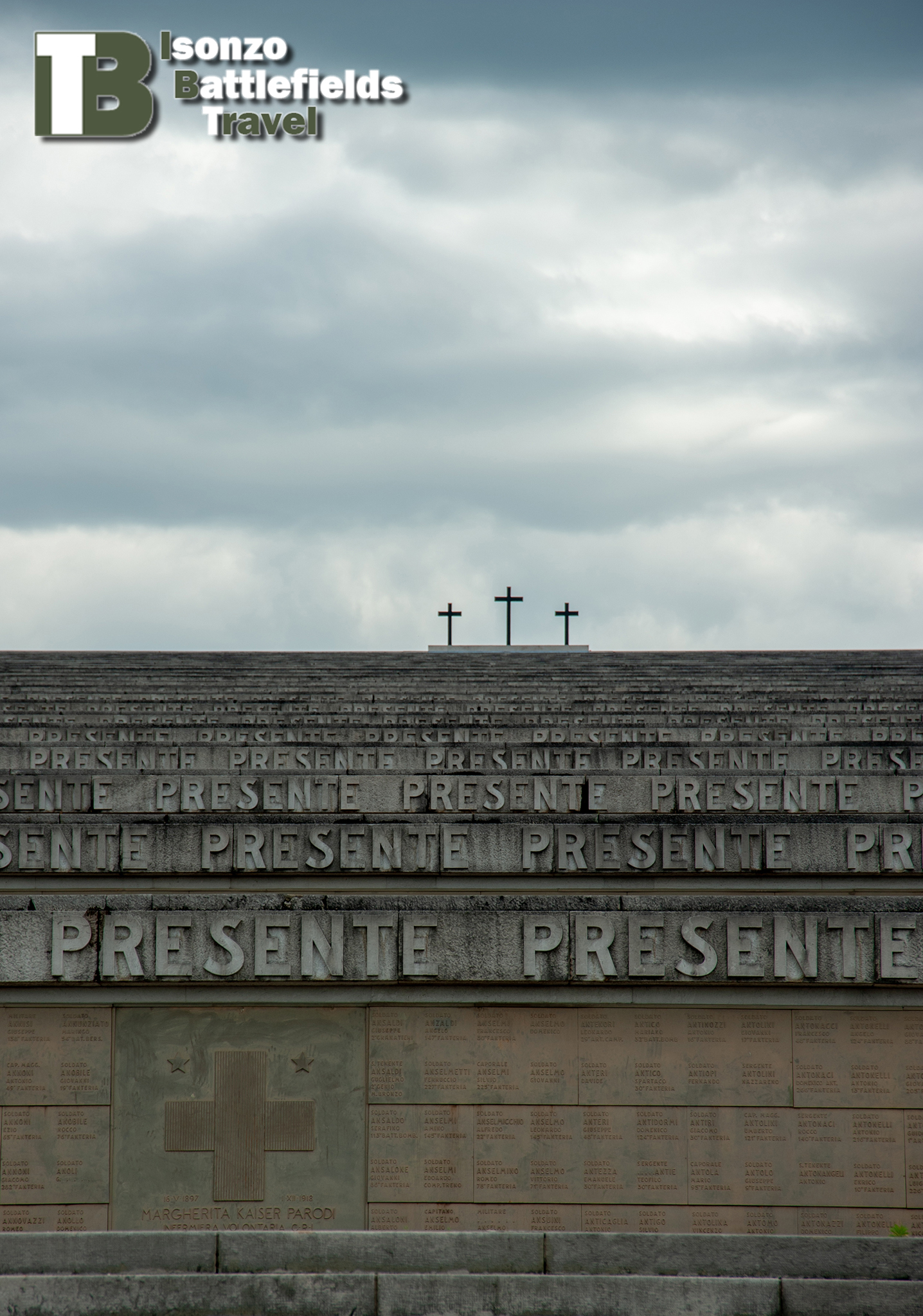 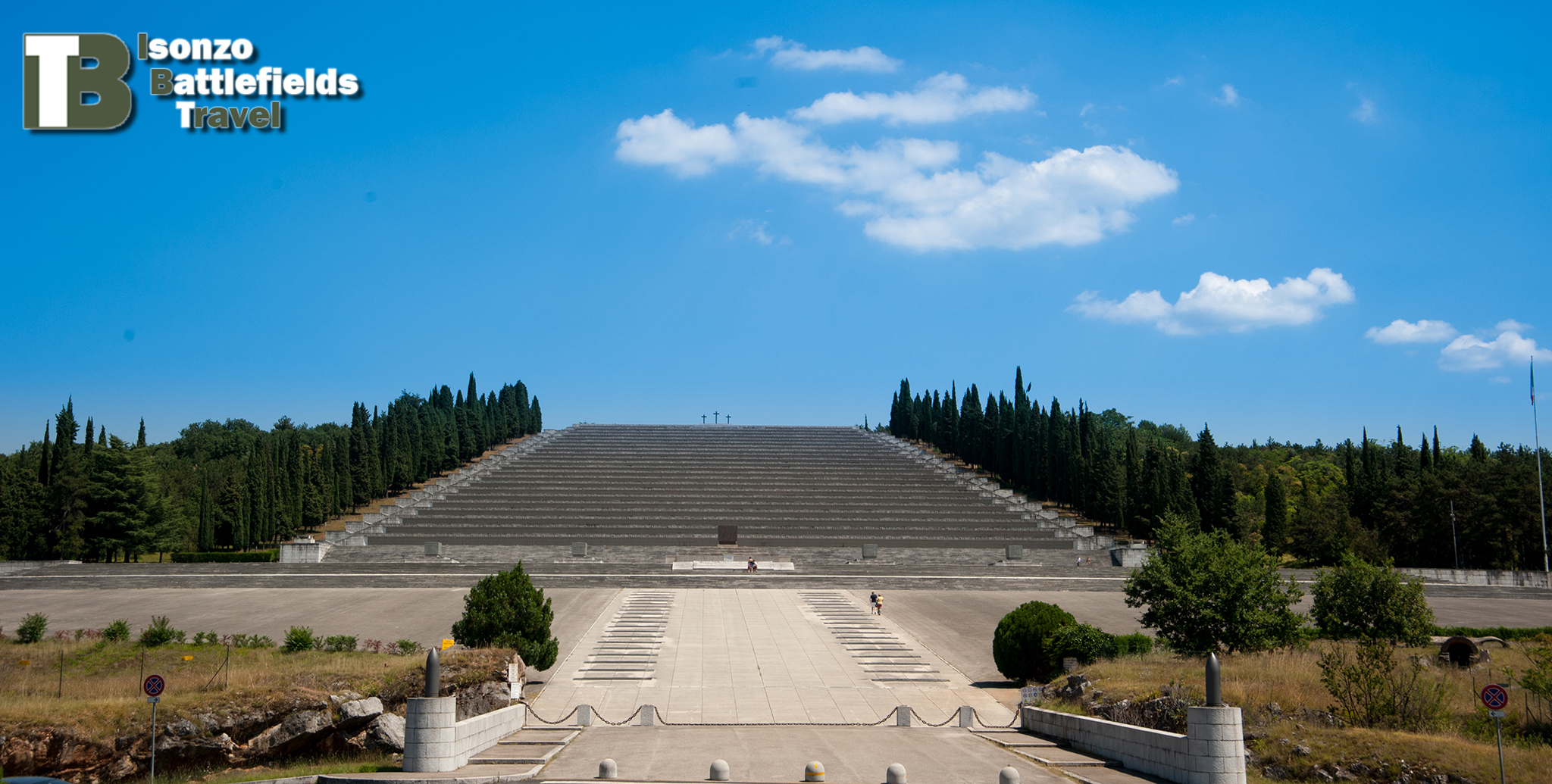 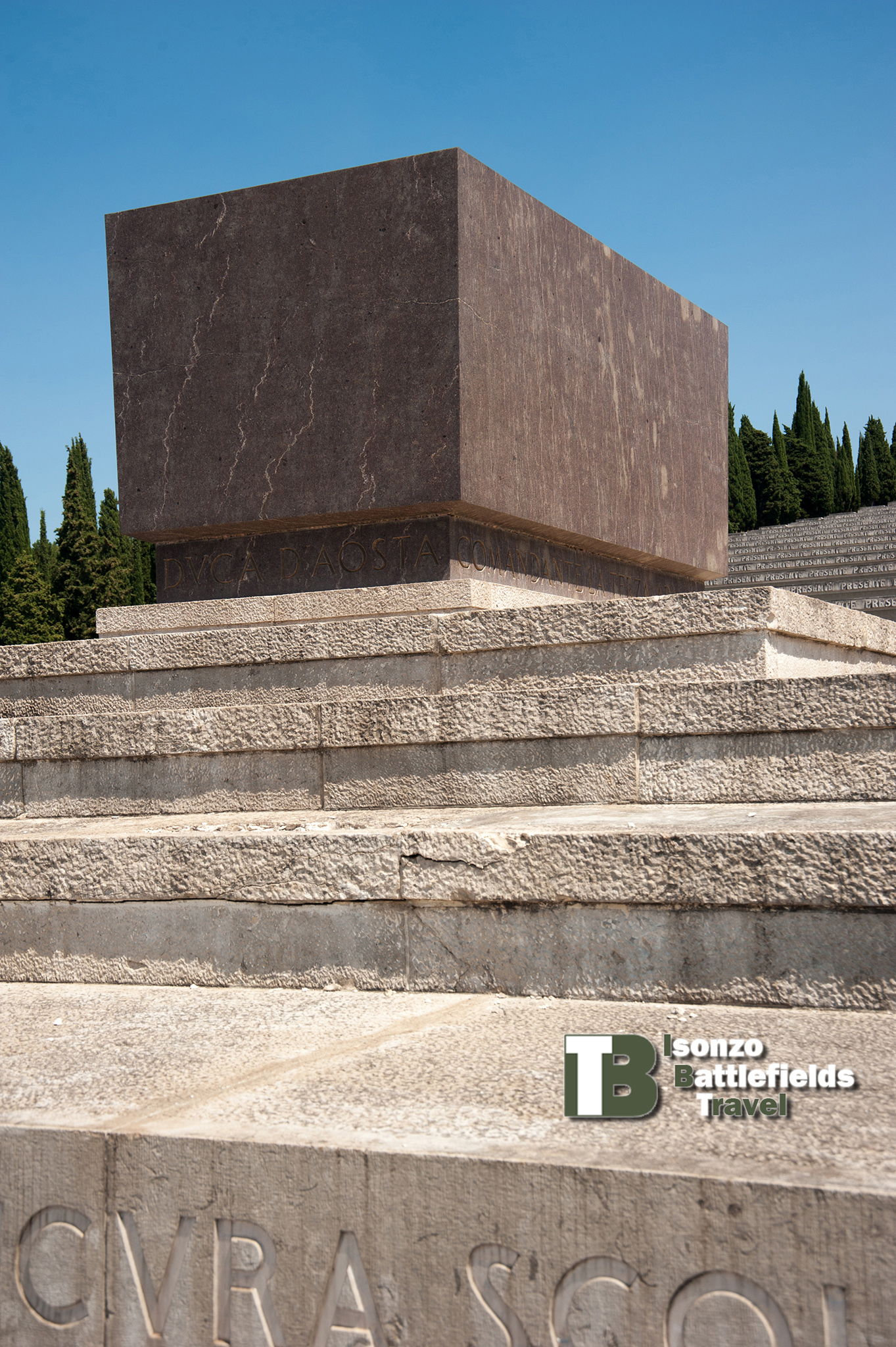 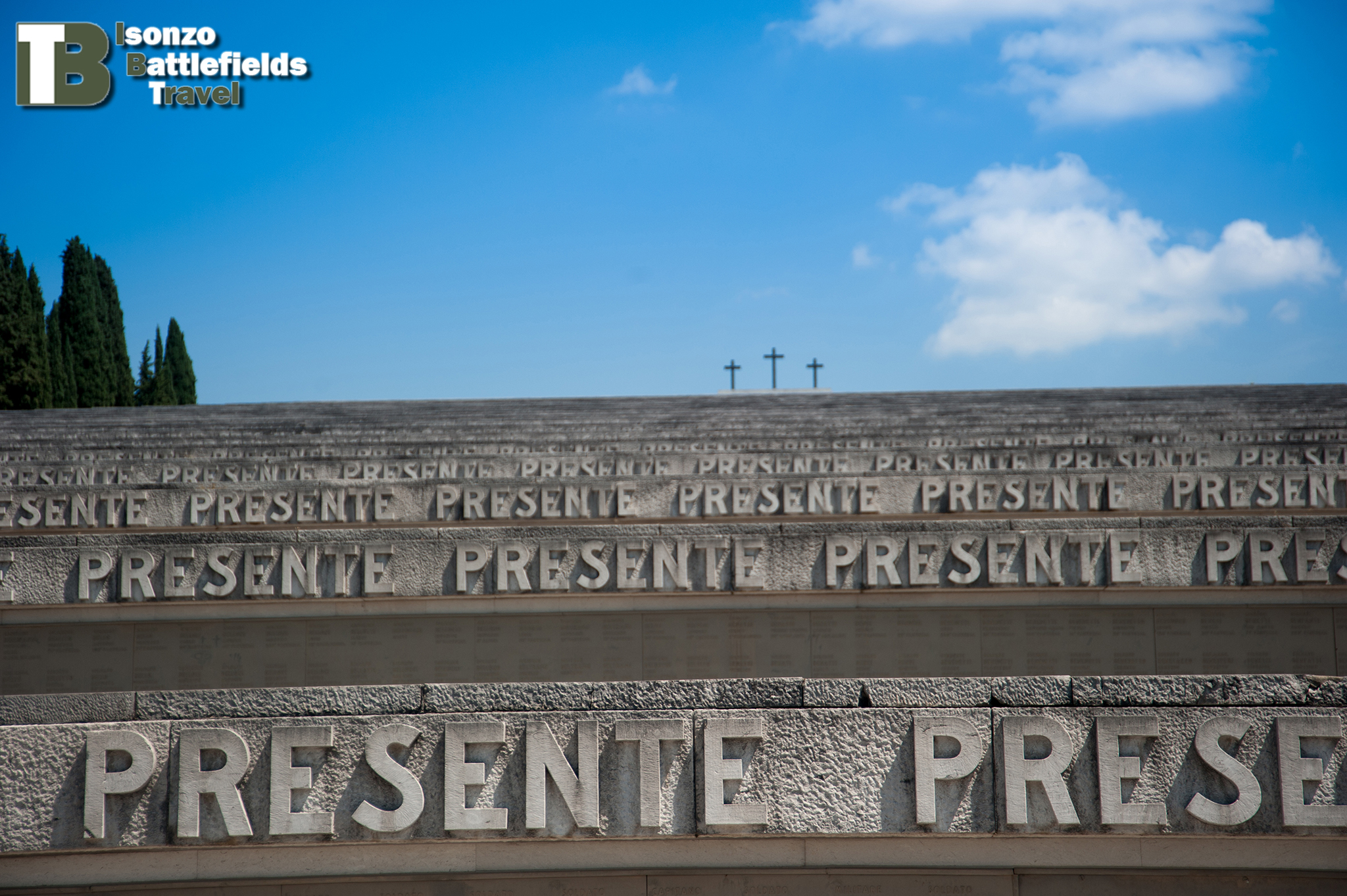 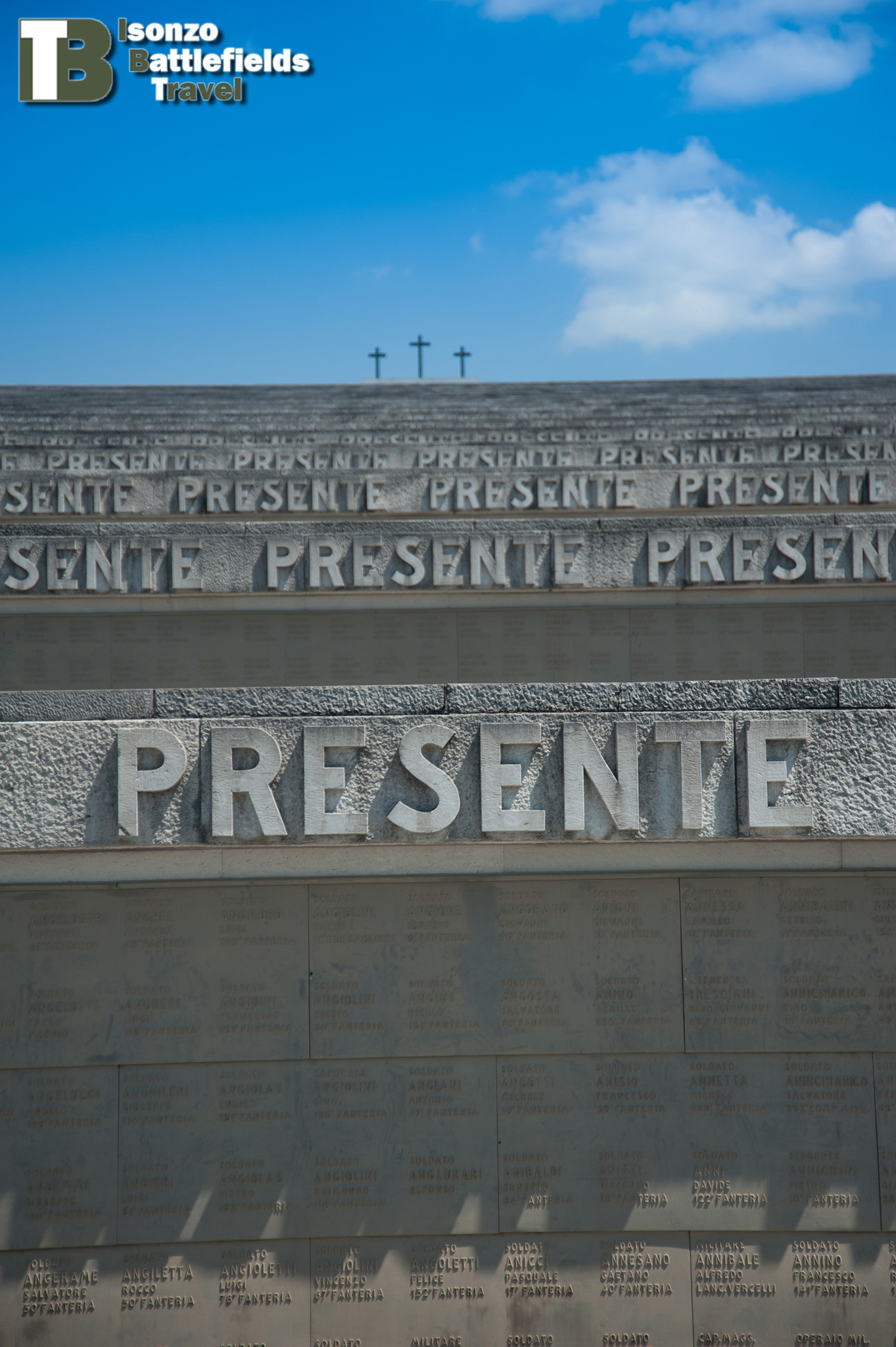 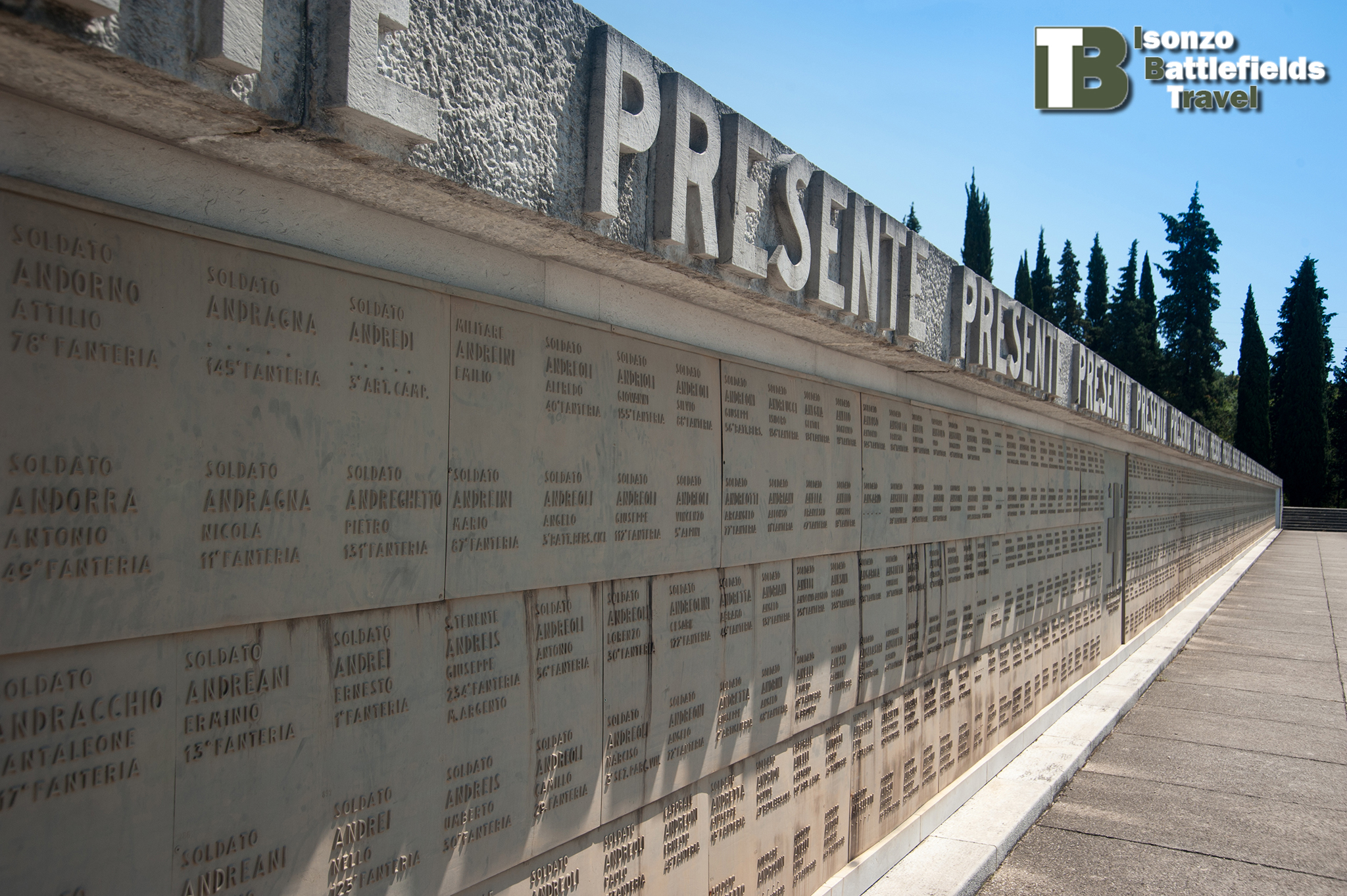 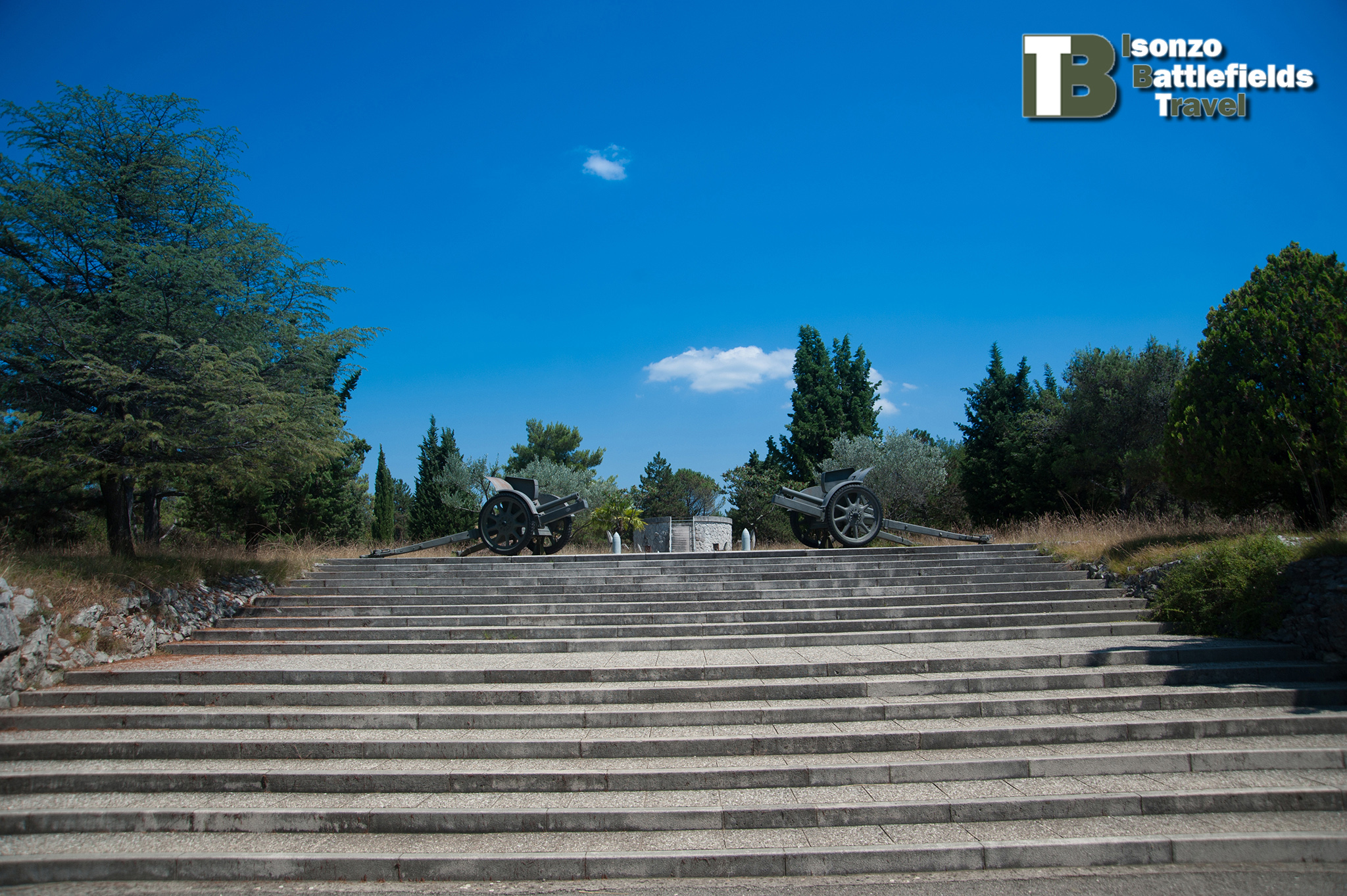 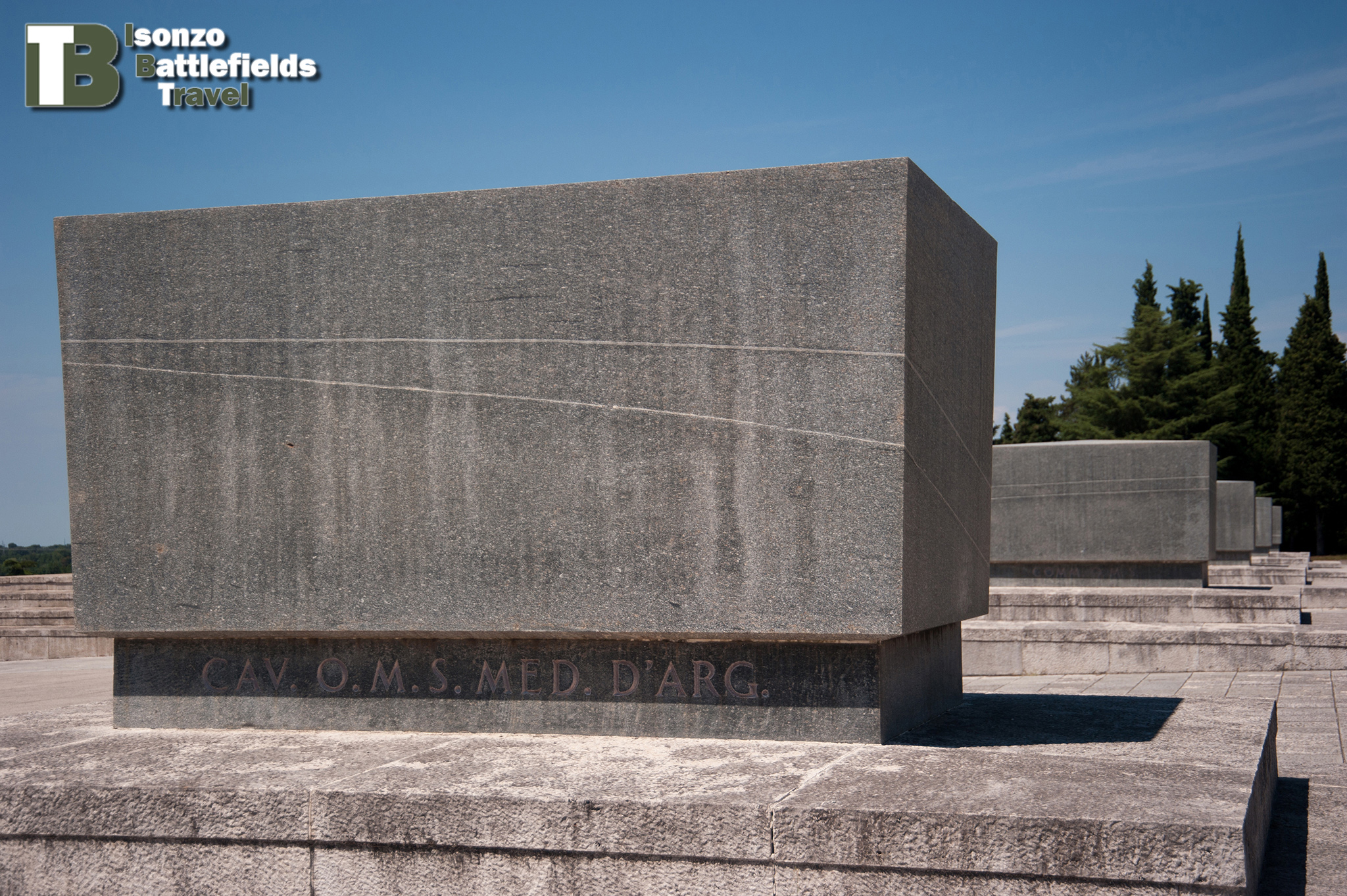