Fortified Line of Mt. Sei Busi
Linea Fortificata del Monte Sei Busi Around the hilltop of Mt. Sei Busi, visitors can observe a section of the so-called “Large Italian trench”, a massive fortified defensive line that used to run from Mt. San Michele to the area of Selz, Doberdò del Lago and Monfalcone. Its construction was ordered by Luigi Cadorna, who intended to block counter-attacks of the Austro-Hungarian army.
After some early excavations, the Trench was reinforced with pre-stressed concrete between autumn 1916 and spring 1917. However, it proved useless during the Twelfth Battle of the Isonzo: the Third Army rapidly abandoned it indeed, following the offensive of the Austro-Hungarians on the Upper Isonzo and their incursion into the Natisone Valleys, in order to avoid encirclement.

Partly eroded by the action of weather, this massive military structure is worth a visit. It runs with a series of zigzags and you can observe its large internal buttresses that allowed troops in or out through some steps. Some machine-gun pits, slits for riflemen and the tunnels dug to store ammunition or arrange shelters can be easily spotted too. Likewise, you can observe several drawings and words carved by soldiers during their stay. These fascinating remains are still studied by scholars and researchers of the Great War to reconstruct the stories of individual soldiers or divisions that fought in this area of the Karst. 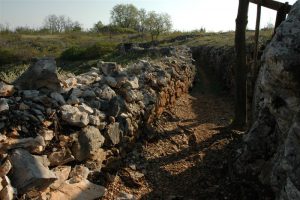 Sinkhole of the 15th Marksmen Regiment of Mt. Sei Busi
Dolina del XV Bersaglieri del Monte Sei Busi A pivotal point of the Museum, the Sinkhole of the 15th Marksmen Regiment is a karstic valley stretching between Heights 89 (where the Redipuglia Memorial is located) and 118 (Mt. Sei Busi). Thanks to the reconstruction under the project “Peace Trails”, now we can visit it inside and walk on the scenic walkways used by the soldiers during the war.

The Sinkhole got its name from a frieze bearing the symbol of this regiment found on an interior wall. It is also known as “Sinkhole of the 500” because the bodies of five hundred soldiers were discovered here and subsequently moved to the Memorial nearby.
The sinkhole was controlled by Austro-Hungarian troops in the early stages of the war but the Italians took it in the autumn of 1915 (Third Battle of the Isonzo) and gradually transformed into an effective structure supporting the frontline. The Italians arranged also a number of first-aid posts, commands, storerooms and ammo depots. Following the Fourth Battle of the Isonzo, the tunnel inside the sinkhole was extended and an additional access was created to facilitate evacuation in the event of collapse.

On the stairs leading to the military tunnel, you can still see the footprints of military boots and some graffiti carved by the soldiers on the fresh cement. If you look carefully at the footsteps, you will notice the round and square nails of their cleated soles, typical of infantry and Alpine Corps boots.
A memorial has been partially rebuilt in the centre of the sinkhole, which can be seen in an aerial photograph dating from 1917. The original inscription discovered during restoration has been placed at the base of this monument. Finally, you can easily identify the area where a mass grave containing 500 bodies was excavated as well as a small cemetery on a terraced level.