The battle for the hill begins (part 2 of 3)

In the previous blog it was discussed why the hill at San Michele was so important for the Italian and the Austro-Hungarian army. But also that the Italians needed tide to get their troops this way, giving the Austrians extra time to get their defense in order. Ingredients that promised a laborious struggle. In part two of this triptych about San Michele, the battle is written.

Although several small villages were occupied at the end of May and the beginning of June, and the Italians occupied important positions, especially in the northern part of the Isonzo basin, the first battle in the series of the Isonzo battles began on 23 June 1915. At that time the troop strength of the Italians about four times as large as that of the Austrian units. The Austrians, however, had a big advantage over the Italians. They had the time to put the defense in order. Yet the imperial army had the necessary headaches. Particularly in the field of artillery, they did not have the desired amount of guns deemed necessary. What they did not know, however, was that Italy had the same problem.

The hill San Michele was defended by the Bosnian-Herzogowin Infantry Regiment Nr. 2, part of the third field battalion. A soldier from that regiment wrote: “We did not shoot a shot and waited for the enemy. As they approached, we threw hand grenades at the approaching Italians. Then we went into the counterattack with knives and hand grenades. “But the defenders are almost running the worst. But at the moment the defenders are about to collapse, the Italian attack is stalling. When the commander of the Italian Third Army, the Duke of Aosta, asks for the necessary reinforcements from the Italian High Command, to hand over the mercy, the supreme command refuses to give this reinforcement, because “the time is not yet ripe”. At the end of the battle the foot of the hill was occupied by the Italians, but they did not control Mont San Michele. 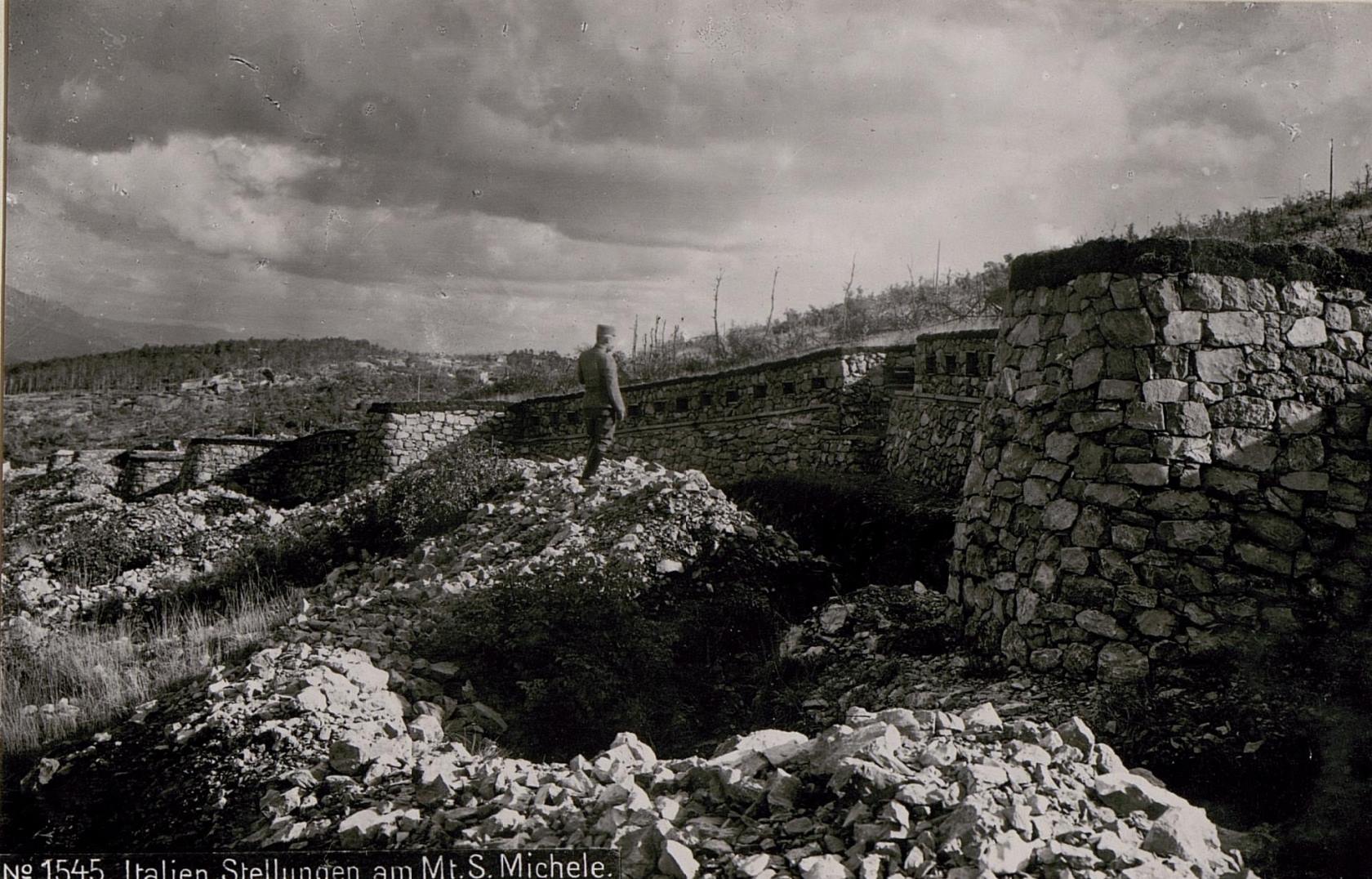 A month later the Second Battle starts at the Isonzo. This time the hill is the main goal of the Italian offensive. After the conquest of the hill it is the intention that it will immediately be driven to Gorizia. The first day of the offensive seems to be successful for the attacking party. In the early morning of July 17, 1915, the Italian artillery begins to fire the enemy positions. Not only at the San Michele, but also at other places on the Doberdo plain. The Italian commanders also try to confuse the Austrians and prevent reinforcements being sent to San Michele. That is why they also shoot the trenches on the northern part of the Isonzo front, so that they seem to attack there too.
At 11 am the attack is being deployed on the Monte dei Sei Busi, followed by the main attack on San Michele itself. The hill is now defended by a Hungarian division: the 20. Honvéd division. Everywhere on hill the Italians reach the Austrian positions and there is fierce fighting. Only in the evening, when the Austrian reinforcements are counterattacked, the Austrians know how to prevent the hill from being taken. The Italians withdraw, but keep the south wall of the hill in their possession. To drive the Italians out there too, the next night the next Austrian counter-attack is planned. During the day this is impossible, because the supply of fresh troops is made impossible by the Italian artillery.

Recapturing the south wall will be a big fiasco for the Austrians. Just when the units that have to do the job are led to the hill, the Italians start with artillery bombardments on that part of the front, in preparation for a new Italian attempt to take the hill. The Austrian units are currently in the open field and are being decimated. The small group of survivors reinforce the already present troops on the hill, but there is no longer a counterattack. With fear and trembling, the Italian infantry attack is awaited and comes the next day, shortly after noon. All telephone connections with the Austrian hinterland have already been destroyed by the Italian drum fire and the situation is unclear for the Austrian High Command. Only one courier knows how to reach the hinterland at 3:00 pm, but he does not have more information than that at 2 pm the imperial positions were still occupied. However, the Austrians on the hill can still hold up to 17:30. Then the Italians slowly get the upper hand and one by one the Austrian positions are taken.

Despite (or thanks to) the absence of reports from the San Michele, it was clear to the Austrian Generalmajor Boog, at that moment in charge of the defense, that if the hill had not yet fallen into enemy hands, this would soon be the case. . A counterattack, in view of the strategic location of the hill, would be necessary to regain control of the hill. He could not appeal to his previous reserves, because they had already been used for the failed attempt to recapture the south wall. It therefore took some effort before Generalmajor Boog had enough troops together. The reinforcements were finally found in the 12. Gebirgsbrigade, led by Oberst Felix Prinz Schwartzenberg. On 21 July, at 2:00 am, the possible guns of the Austrians started to fire the San Michele. At 4.00 am the 12. Brothers Brigade attacked. The battle lasted about an hour and then the hill was again in Austrian hands. After this rapid success of the 12. Brigade Brigade, a Bosniak battalion (Bosnian units in the service of the Austro-Hungarian army) was deployed to defend the hill. Although the Italians still made new attempts to take the hill, these battles often ended at an early stage. In the end, the Italians’ attack power diminished completely when the supply of grenades had shrunk to a minimum.
Both parties also had to deal with other enemies: a lack of water both parties had a problem and cholera broke out. The Italians were also confronted with typhus. In this misery, the starting signal for the next offensive was awaited by the soldiers. 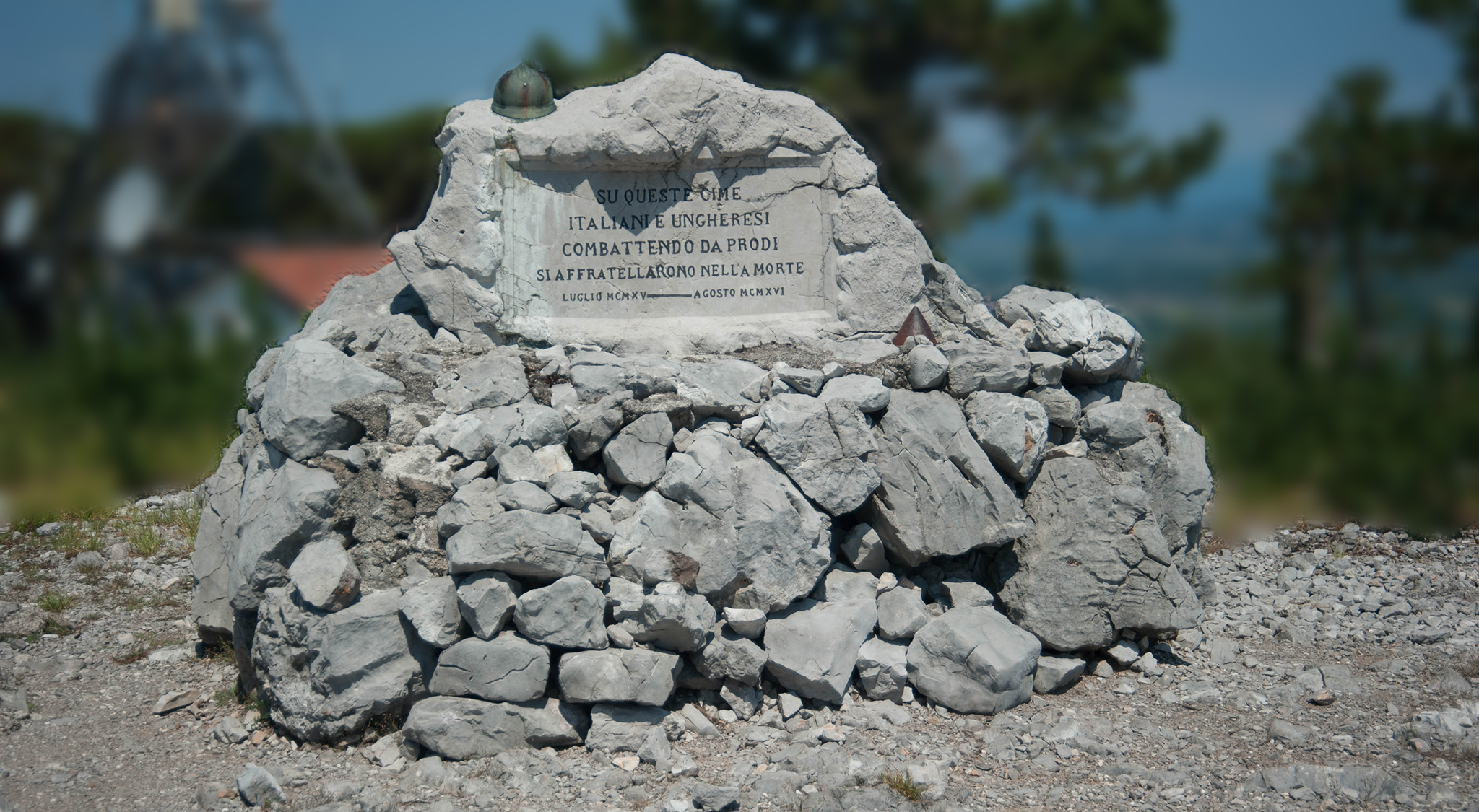 Third time is not the charm

In early September 1915, the commander-in-chief of the Allied army, General Joffre, visited the Italian headquarters. On behalf of the allied forces, he requested the Italian commander Cadorna to start a new Italian offensive, in order to alleviate the pressure of the Austrians on Serbia. Cadorna, who had now come to the conclusion that he needed more artillery, still needed time to build up his firepower. But when the situation in Serbia became untenable in October, Cardorna succumbed – albeit not at heart – for the allied pressure. On October 18 a new offensive was started to take Gorizia. The third battle of the Isonzo was a fact and even now the hill of San Michele took an important place.
This time, the hill again, as at the start of the second battle, was defended by the 20. Honvéd division, which had already relieved the Bosniaks. Because both parties were close together and because the weather had meanwhile changed, the Austrians were not able to get the defense line back in order. The position now had weak spots and many shelter did not offer any protection anymore. At the introductory shelling of the Italians, who now had much more artillery than at the start of the second battle, many of the defenders lost their lives. The battle was chaotic. Although the Italians now seemed to have the whole hill in their possession, Honvéds still remained everywhere. Eventually the fight lasted five days and the Austrians managed to capture another 500 Italians. But the price is high. Several Honvéd regiments lose more than half of their men. Eventually the Austrians get control over the hill again and Austrian 43. Infantry regiment, called as a reserve, is immediately charged with the defense.

The third battle at the Isonzo, however, is still not over and although it has been relatively quiet in the San Michele sector for a few days, the battle flares up after a few days. On the 23rd of October, the Italian Bersaglieri undertook a new attack on the hill. But the attack bleeds to death. A counterattack of the 43. Infantry Regiment and the Austrian artillery ensure that the new Italian danger does not hold.
A day later, the commander of the Italian Third Army, the Duke of Aosta, decides to take another attempt to take the hill. The earlier and almost successful attempts will have played a role in his decision-making and – also not entirely unimportant – small successes have been made in the vicinity of the hill. Again there is a lot of fighting on the flanks of the hill, but the result is nil. In the middle of the night there is still a lot of fighting, but then it becomes quiet. Cadorna has issued the order to suspend the offensive for the time being. This way, the defenders get a breath of fresh air again and fresh troops can be transferred. In haste the trenches are being repaired, the barbed wire barriers are put back in order and the ammunition is replenished. The rest lasts three days.

Part three describes how the battle for the hill of San Michele in August 1916 comes to an end.