In the last part of this triptych about the San Michele the Italian attack is resumed with a considerable bombardment of the Austrian positions. It is now the end of October 1915. Some of the newly performed repairs are canceled and again the Italians invade the Austrian positions. It is terrible. After all the battles and bombing of the last few days, there are torn parts of the body in the trenches, the drinking water is completely up and the rats are bursting. Wounds can not be helped and in some places even the bodies of killed comrades are used as cover against the enemy fire. Even now it seems as if the Italians have decided the battle for the hill in their favor, but on November 1 there is an Austrian counterattack that is slowly putting things back on track, although an Italian bombing threatens to cancel that attempt. It says something about the balance between the warring parties and the generals sacrificing their troops. However, the Italians are the first at the end of their Latin. At that moment, they no longer have fresh troops available to push through further. This attempt ends on 3 November. Exact loss figures on this hill are not known. The number of victims is included in the statistics of the entire third Isonozoslag: nearly 70,000 Italians and 40,000 Austrian victims have fallen. It is well known that on the Austrian side whole regiments, after having held their position on the San Michele, no longer exist. 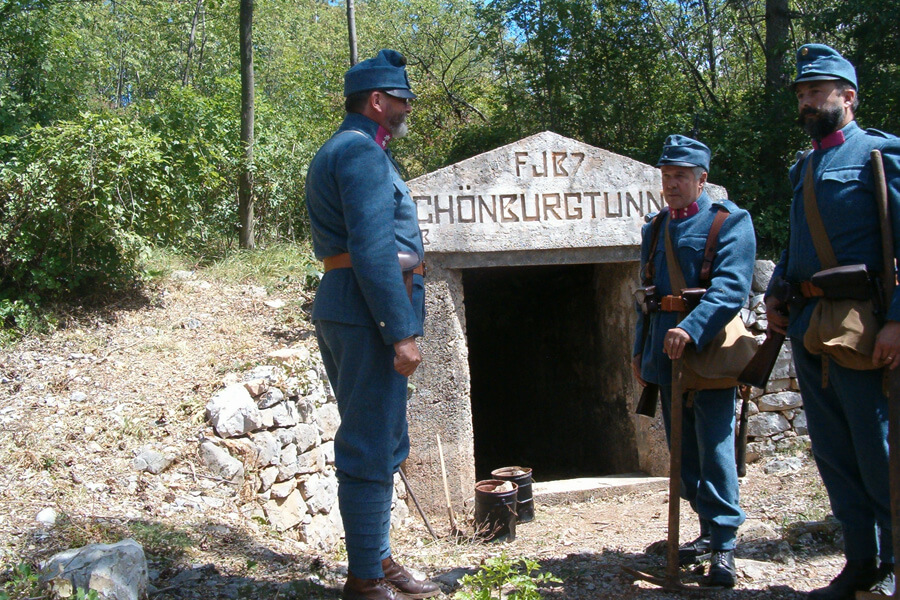 Austrian reserves are running out

The commander of the Austrian troops on the Isonzofront, Svetozar von Boroevic, starts after this third battle to really worry about the defense of Gorizia. The violent Italian offensives caused the Austrian army to get through its reserves. Only when Svetozar von Boroevic manages to convince the Austrian army that the Fifth Army has reached the limits of its abilities, he is promised reinforcements. From the eastern front an infantry brigade and an infantry division are sent in the direction of the Isonzo in support of the Fifth Army. But before they arrive, the Italians start their fourth offensive on the Isonzo on November 10th. Soon after the completion of the third battle, another new attack starts again with Gorizia as the goal, but this time the center of gravity of the attack is not at Monte San Michele, but northwest of Gorizia. The Italians now want to try the breakthrough in a different place.
This does not mean, however, that it remained quiet on the San Michele. Whereas in the previous attempts to occupy the hill the attack is mainly deployed from the west and the south, it is now decided to take the hill via the north. For support, pressure is put on the southern flanks of the hill, so that not too many Austrian reinforcements are transferred to the north side. This time, the Austrian defenders also stand. The 7. Laibacher and the 24. Jägerbatallion of the Austrians do not allow the Italians to take the positions on the north flank. On 13 November the Italians try again. Initially this attempt seems to be more successful than that of a few days earlier: four hundred meters of field gains are being made. But the profit is short-lived, because in the first night the counter-attack is started and before the morning both parties are back in the starting position of a day earlier. Among the Austrians there are one hundred and forty deaths and four hundred wounded are counted. “Only a moderate loss” report the Austrians. The fourth battle of the Isonzo lasts until December 11, 1915, but serious attempts to take Monte San Michele are no longer being made. 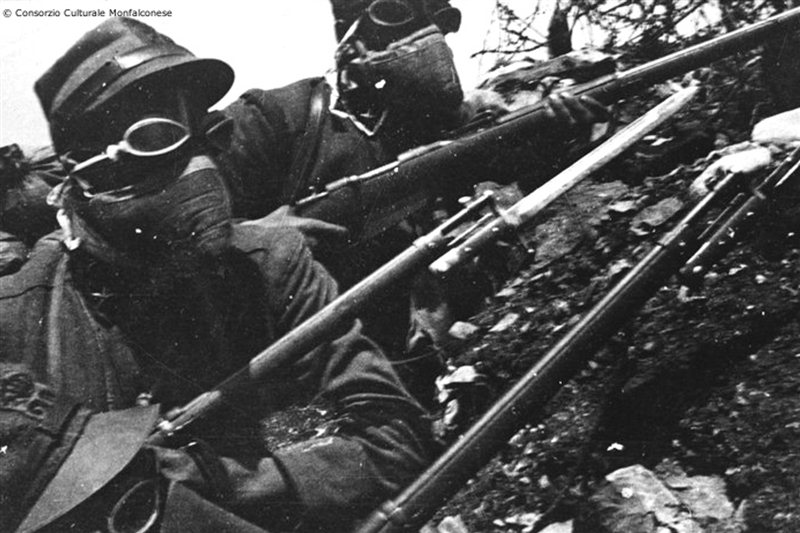 In 1916 it is the Austrians who take the initiative on the San Michele. In order to improve the defensive positions on the Doberdo Plain, the High Command wants to expel the Italians from a number of zones, including the southwestern foothills of the San Michele. To achieve this goal, that is the plan, combat gas is used. It will be the first time that gas is being used on the Isonzo front.
Preparations take place mid-June 1916. Six thousand gas bottles of fifty kilograms, filled with chlorine and phosgene, are transported by rail to this part of the front. On 26 June the attack on the Italian lines is scheduled, but because the weather is not favorable, the time is postponed. It almost goes wrong when an Italian grenade hits a battery with gas bottles, but no wonder gas escapes. On June 29, the weather conditions are found to be favorable enough and the gas is released at the Italian positions. Here again, the practice proves to be more stubborn than the plan, because the Austrians do not manage to let the gas escape at the same time. Almost half of the gas cylinders are opened twenty-five minutes late, because the unit in charge of this task has not seen the missile signal – the starting signal for the attack – due to the morning fog. Seventy gas bottles have also been so damaged by the Italian shelling of the previous days that the valve does not want to open. The result is that two hundred and twenty Austrian soldiers are eliminated by their own gas, of which thirty-six are killed. The losses among the Italians are greater. There, thousands of troops are eliminated by the gas, killing 2700 men.
The Austrian infantry attack that follows after the gas attack manages to reach the Italian positions, but the Italian gunmen know how to drive the Austrians out in the evening with a bombing. The next day the situation is again the time for the gas attack. The only gain that – in retrospect – was achieved was that the Italian activities on this part of the front were significantly less until one month later the sixth battle of the Isonzo started. 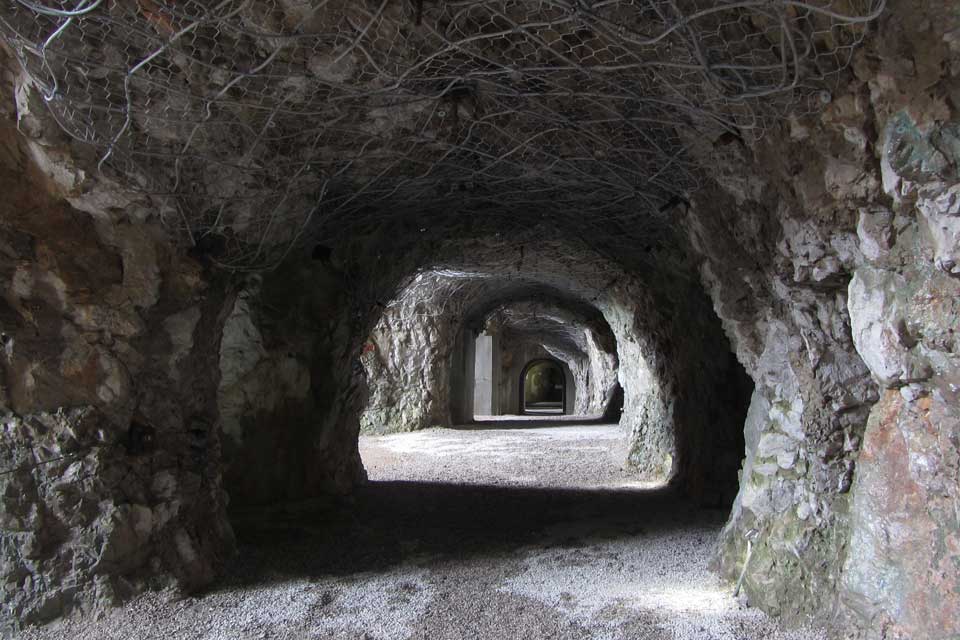 In August 1916 the Italians take the initiative again. In recent months, the army command has put a lot of effort to strengthen the artillery and another attack on Gorizia is planned. This time it is the intention to approach the city from both the north and the southwest. Two attack groups are set up for this purpose. The three divisions that form the South group are given the task of taking the San Michele.
The attack starts on the 4th of August with a huge artillery bombardment of the Italians that lasts for several days. Not only is the San Michele under fire, but the entire Doberdo plain. Gorizia is also under fire and the Austrian artillery officers are very concerned that the Italians have significantly increased the firepower of their artillery. If the Austrians then also discover that many new Italian units have been deployed, they know that there is a new and large Italian offensive.
On August 6, the Italian artillery fire is moved to the San Michele on Austrian positions on the Doberzo plain. At four o’clock in the afternoon the infantry storms the hill. The murdered defenders do not last long and the Italians quickly gain ground. That goes so fast that the Austrian commanders are forced to use all available reserves to drive the Italians away from the hill again. The final Italian breakthrough is feared. In the night six on seven August, fierce man-to-man battles take place on the hill. Floodlights of the Austrians illuminate the hill, but the struggle can hardly be followed by the chaotic course.
In the morning fresh Italian troops are deployed and they slowly but surely gain the upper hand on the Austrians. The Austrian counterattack has finally failed and there are no reserves available to drive the Italians off the hill. In the course of August 7, 1916, the San Michele finally fell into Italian hands. The Italians also succeed in other sectors and the Austrians leave from Gorizia. The strategically located city has fallen. This also brought an end to a battle of fourteen months around Monte San Michele.