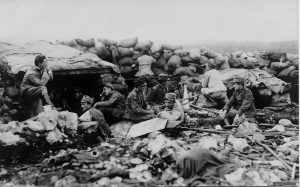 In contrast to the other three Battles of the Isonzo (June, July and October), this offensive lasted a short amount of time, and is sometimes considered a continuation of the previous offensive.

Most of the clash concentrated in the direction of Gorizia and on the Kras Plateau, though the push was distributed on the whole Isonzo front. The 2nd Italian Army, aiming to Gorizia, was able to capture the hilly area around Oslavia and San Floriano del Collio overlooking the Soča (Isonzo) and the town of Gorizia. The Third Army, covering the rest of the front up to the sea, launched a series of large and bloody attacks which brought no significative gain.

Mount Sei Busi, already the scene of bitter fighting, was attacked five times by the Italian forces, always in vain.

The intensity of the fighting increased until the end of November, when the bridgehead of Tolmin (Italian: Tolmino) was heavily bombed by both sides and the casualty ratio per day reached its apex. In the first fifteen days of December, however, the fighting was reduced to small scale skirmishes as opposed to the massive frontal assaults that characterized the previous phases of the battle.

An unsigned truce arrived together with the first great cold in the mountains of the Kras, and operations were arrested due to lack of supplying.

The Austro-Hungarian High Command, worried by the huge losses, notwithstanding the 12 additional divisions sent to the front, for the first time requested help from the German Empire, which was not formally in the war against Italy yet. This reason led the Germans to intervene on the Italian front but only starting from the Eleventh Battle of the Isonzo.