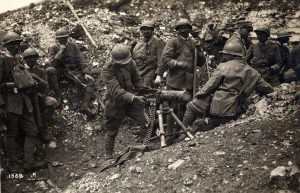 A short, sharp encounter fought from 14-17 September 1916, the Seventh Battle of the Isonzo saw Italian Chief of Staff Luigi Cadorna shift his focus from broad-based diversionary attacks to tightly focused initiatives directed at single targets. This latest Isonzo battle saw the Italian Third Army, with a large amount of artillery, attack on the Carso toward Nova Vas. Following the a successful first day, Nova Vas was assaulted on the second day with substantial artillery bombardments on German bunkers. Within minutes of the Italians ceasing fire, the Austro-Hungarian forces surrendered.

Nevertheless Cadorna’s continued offensives along the Soča (Isonzo) did succeed in wearing away at Austro-Hungarian resources, both in terms of manpower and in crucial artillery availability. As each battle proceeded the Italians’ war of attrition seemed ever more likely to wear the Austro-Hungarians into defeat, short of assistance from their German allies.

The Eighth Battle of the Isonzo followed on 10 October 1916.