The first victim at the Isonzo

Although the war on the Isonzo front erupts only in the spring of 1915, the first war victim in this border region between Austria-Hungary and Italy falls ten months earlier. This event is only a very small footnote in the history of this region, but is therefore no less special. The victim is a lady of Austrian nobility and the circumstances are suspect. 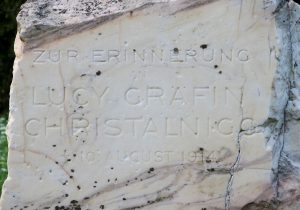 Who drives north through the Julian Alps to the south, follows the road that largely passes the Isonzo. The Isonzo which is called Soča by the Slovenians. Between Bovec and Kobarid is a small, white monument along the side of the road. It is not very noticeable and many people drive by with a speed, in the delusion that it is a memorial for a traffic victim. In itself not strange, because the road is, especially in the summer months, very popular with motor tourists and certainly invites the gas to open equally well. But those who look better at the white monument discover that the year 1914 is carved on the pedestal. And then you’ll be curious why that memorial is there.

In August 1914 many young Slovenian men were mobilized and took part in the army of Austria-Hungary. They have left for Galicia or to Serbia. Yet the war is not far away. The first wounded have already returned home and a single family has already received the terrible news that their dear son or young husband will not return from the battlefields.

In the small villages around the Isonzo, the remaining men work on harvesting the harvest. In addition to work on land, a number of them are also used to guard the border with Italy. The border guards who normally perform this task have also been ordered to go to the front.
The new task is a job that should not be underestimated for farmers. There are rumors of smugglers who are smuggling gold and weapons from France to Russia and Serbia, and one of these smuggling routes would pass through the region via the (then still) neutral Italy. That is a big responsibility for the brand new border guards and also brings some nervousness. 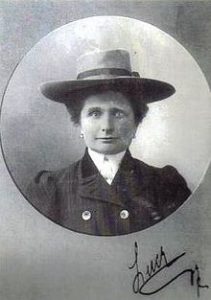 Meanwhile Lucy Christalnigg, as a volunteer of the Red Cross, tries to contribute to the suffering of the wounded soldiers. In the vicinity of Gorizia she collects various goods which she then brings to the depot in Klagenfurt. Because Lucy is married to Count Oskar Christalnigg, she also has the means to do this: she has access to a car, among other things, and she also likes to drive in as a modern woman.

Lucy Christalnigg is born in Graz, Austria, as Bellegarde, a small noble family. Lucy married Oskar Christalnigg on 4 September 1893 and she stayed with her husband at the family residence in Klagenfurt. They have multiple possessions, including a house in Gorizia.
The two children who are born die already at a very young age and partly because of this it is not a happy marriage. The two spouses therefore quickly follow their own path.

Lucy Christalnigg of Klagenfurt, on behalf of the Red Cross, will drive to Gorizia on 15 August. It is not an easy route on which she tries to reach her destination. The road is unpaved, meanders along various cliffs and when the evening twilight comes in, there is very little light. On the way the countess comes to various checkpoints of the invasion border guards. Fortunately that is no problem. She comes there more often and she has permission to travel through the area. Her arrival is always announced.

Lucy has already covered more than half of the route, when she arrives at the hamlet of Srpenica, where a checkpoint of the border guard is set up. But deer is wrong. There are shots and deadly hit Lucy drives against a wall where she comes to a standstill. The two temporary border guards have discharged the shots.

The population is shocked and the army leadership has been shocked by the death of this noble lady.

The archives show that the two men are brought before the court martial. Why did the two men shoot? Why did they not know about the countess’s arrival? Were they potentially interested in the gold that the smugglers would carry along this route? 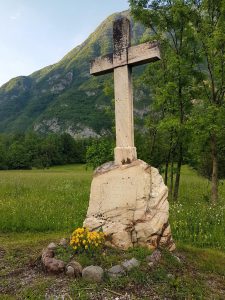 Exactly what has happened can not be traced. The court-martial is free from the gunmen, for she is of the opinion that the border guards have complied with their guidelines. The message that Lucy Christalnigg was in arrival they would not have received, because they were on patrol in the area at that time. It remains unclear, however, why the two did not arrest the car, but shot it. The reason given for this is that the countess drove on, because she was assuming that her arrival – as always – had been passed on by the authorities.

Because of this sad incident Lucy Christalnigg is the first victim of the war on the Isonzo. At first she was buried in Gorizia, but later the grave was moved to Zollfeld in Carinthia. On the spot of disaster her husband has erected the monument in memory of her. It is the monument that attracted attention at the beginning of this story, in the verge of the road between Bovec and Kobarid.